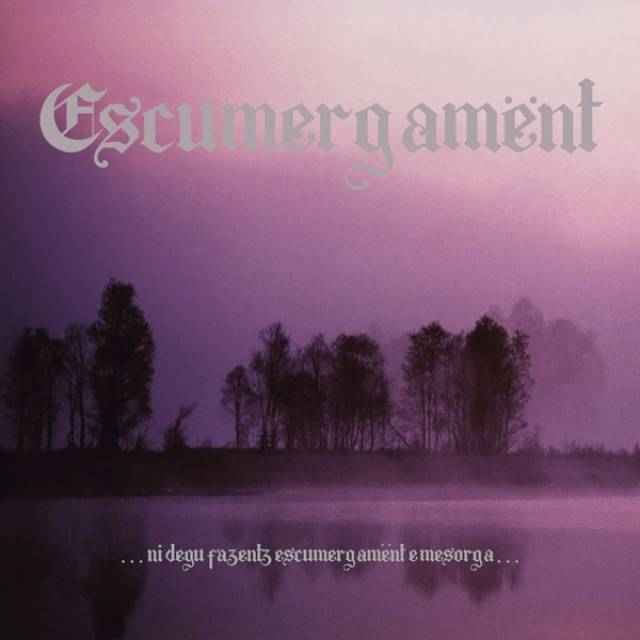 "Hails!
The name and album title are in a language called occitan. A language mainly used during the medieval era, but which is now slowly fading away from existence. Escumergamënt means "Abomination", and the album title is a short passage taken from a longer text found in the Holy Bible. People who are interested in old languages and solving riddles could decipher this and find out certain parts of our overall concept.
The arrival of Escumergamënt has been a long and clandestine journey, starting about five years ago and now revealing its ugly head with the release of ...ni degu fazentz escumergamënt e mesorga… The album is composed of six songs, each one a key that opens a far greater concept. Just like the artwork, we wanted to introduce the beholder to something rather compelling, just to slowly plunge them deeper into the abyss. The first lyric, “Of old night and winter”, and the last, “Black ash and ruin”, are a beginning and an end of this cycle, the former being about the deep-rooted wish to extinguish all the stars in the universe, the latter a story about the last lingering souls left gazing into a universe devoid of all light and life.
We recorded the album more or less live in a small wooden chapel on reel to reel tape, without triggers and click tracks. A very analogue recording, something that was important to us. What you hear is what we play, errors and all. Since it was winter, the temperature inside and outside the chapel was not too far apart. Discomfort brings creativity, and in three days the album was recorded. The mixing took place during the summer at one of our home studios. Regarding the master, Necromorbus took care of that. He is extremely talented and since we have worked with him in the past on other projects it was him or no one else.
Expect eerie and obscure black metal with a different kind of darkness than your typical juvenile black metal band. Conceptually we work with riddles and clues, inspired by authors such as Arthur Machen and Clark Ashton Smith. We want the listener to receive something way more substantial than just a slab of music with lyrics and layout that are there just to be there. Secrets are to be found for those eager to travel into the starless nights.
It is almost impossible to keep a line-up a secret in 2021, but we try to do our best to keep a low profile when it comes to Escumergamënt. Since what we create is so different from our past work, we don't want any wrongful preconceptions that could cloud the experience of . . . ni degu fazentz escumergamënt e mesorga ...".