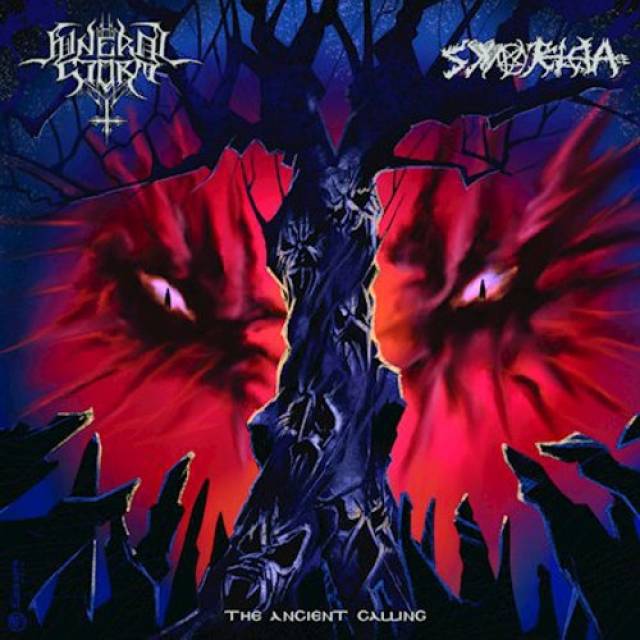 Aptly titled, The Ancient Calling brings together two newer old-style Greek black metal hordes, both of whom have released celebrated debut albums via HELLS HEADBANGERS in 2019: FUNERAL STORM with Arcane Mysteries and SYNTELEIA with Ending of Unknown Path. FUNERAL STORM are up first with "Mistress of the Night," a pulsing stream of sumptuous mystery. Of especial note is that the drum machine used on this track is the exact same one used during the '90s at Storm Studio for such Hellenic classics as Rotting Christ's Thy Mighty Contract and Non Serviam, Varathron's Walpurgisnacht, and Nergal's The Wizard of Nerath among many others. Not to be outdone, SYNTELEIA bring more mystery with the moody "Stellar Return." Epic in its narrative, simmering in its tension, and then bringing it all home in climactic fashion, the track poignantly underlines the traditional heavy metal element so intrinsic to the early Greek black metal style.
Fittingly, the cover art for The Ancient Calling was done by none other than Panos Sounas, who did the classic cover art for Necromantia's first two albums, Crossing the Fiery Path and Scarlet Evil Witching Black. The past is fully alive with FUNERAL STORM and SYNTELEIA - hail Hellas!