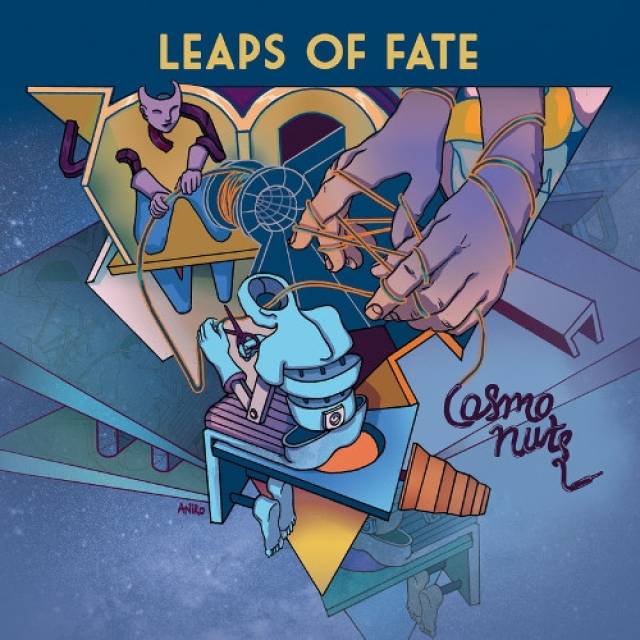 New EP "Leaps Of Fate" out on November 17th!

Following their first album Holidays in Andromeda, Greek psychedelic rock group Cosmonuts have teamed up with Sliptrick Records to release their new concept EP, titled Leaps of Fate. The EP’s concept looks at the power of destiny, as presented in the works of Greek ancient tragedy. Their grooves are multi-dimensional, characterized by sudden stops and obscure twists. The feel is mysterious, theatrical and almost operatic. Through their endeavor to contain sophisticated thoughts within their lyrics, and to embrace musical and semantical elements from Greek and Eastern tradition, the band tells their story with three distinct tracks.
The opening track titled Why Do We Still Care? is a short introduction to the album’s semantic and sound vibe. It starts with a mysterious gradually oscillating noise, that evolves to the beginning of the “in your face” vocal harmony. The oscillating noise follows the evolution of the narrator’s psyche. Later, the song opens up into a joyful but ironic sound vibe, peaking with the narrator’s insanity, to come back, eventually, to the loop of the oscillating “Why do we still care?” phrase.
The Leaps of Fate EP continues with the more vivid, Flesh And Bones, that is based around the ancient drama “The Bacchae”. It is an acid blues rock/rhythm and blues, experimenting with some, odd-rhythm fusion elements, mainly on the drum parts. Guitar riffs, licks and solos are heavily influenced by Jimi Hendrix and SRV. The theatrical interpretation of the vocal lines have a David Bowie, Queen, Pink Floyd and The Kinks vibe.
The final song, Reflections, is a long, 12-minute multi-dimensional track, that consists of several attitude twists and is based on the ancient drama “Oedipus Tyrannus”. The song can be divided into three parts. The guitar solo, that dominates the first part, is an introduction to the song’s mysterious, heavy sound. Switching between E Hungarian gypsy minor, A Hungarian gypsy minor and D Dorian, it has an “earthy” feel. Its structure is that of an eastern “Taqsim”, that is traditionally played by a bouzouki or a clarinet. Here it is played by a heavy distorted violin-like screaming guitar, influenced by Eric Johnson and Yiannis Spathas. It is backed by an ambient drone by the rest of the band, where improvised melodies and noises occur. The part ends with some heavy climbing up arpeggios by the guitar and drums, that lead the listener to the first vocal lines. In that spot, the vocals take the turn from the guitar to give an introduction to the song’s concept. “Years ago, a father meets his son at the crossroads, near a willow tree”. From there, it leads to the explosion of the first part, through a tight, drum ’n’ bass-like groove and riff, and an ambient guitar solo over the top, that unfolds into the second part. The guitar introduces the feel of the verse, initiating with a hazy acid blues/jazz riff. The band enters with a waltz-like, mysterious, easy groove, while the story unfolds. “He wakes out of a nightmare, and he can see a woman lying over thee…” and “…runs back at the willow tree, looks his mirror in the lake but he can’t see”. Then the rhythm and feel suddenly changes as the main character “takes his own eyes off”. After, it comes back to the main rhythm but with a much darker feel, saying “blood to blood, tear to tear, he shall perish for his deeds”. This part builds up and explodes into a staccato, heavy post/progressive rock riff, that leads to the songs climax. Here, the main character grieves for his fate, asking the “gods forgiveness”, accompanied by a glorious melody that deepens his mental state. It ends with the peaking of the character’s tragedy and leads to the last part. This part symbolizes “the catharsis”. A serene, ambient guitar riff initiates, accompanied with a smooth drum beat and bass line. Soon, the guitar solo engages with a creamy smooth tone, starting low and gradually going up. The feel of this part is “joyful sorrow”, indicating that the character is cleansed from his misfortunate ordeals.
Recorded at Artracks Studios in February 2020. Production and mixing by Clyde Jabra and mastering by George Priniotakis. The album’s artwork, that presents the mythical “Three Moirai” in a futuristic, comic style, is designed by Aniro. 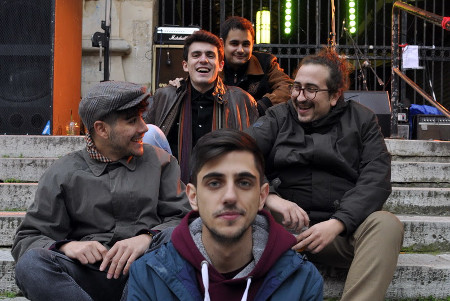