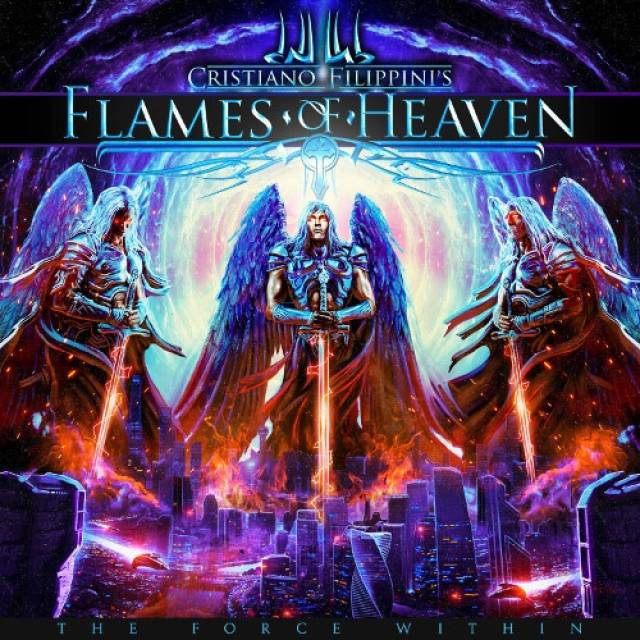 New album "The Force Within" out on November 20th!

In dark times, epic music is needed to get people in a positive mood again. On the surface, "The Force Within" belongs to the genre of Epic Symphonic Power Metal, yet there is more behind Cristiano Filippini's FLAMES OF HEAVEN than just trying to deliver a strong all-star album. This project brings together the most talented group of Italian metal musicians to deliver a creative powerhouse album. The ideas of composer, producer, and guitarist Cristiano Filippini have developed into a real spectacle, which will win over fans of the genre in no time.
What existed in 2018 as a simple idea by Cristiano Filippini quickly took shape. Born in 1981, the musician studied law and, after graduating, decided to turn more to his musical career. Over time, he released three instrumental albums, "The First Crusade" (2010), "Flames of Passion" (2011) and "The Best of Swords and Flames" (2015), which can be attributed to the genre of Epic Symphonic Opera. At the same time, he gave concerts in Italian opera houses and churches with a Symphonic Orchestra. It was then when the idea was born to make his childhood dreams come true: a career in the Metal scene. Due to his good contacts in the Italian music scene, he quickly found fellow musicians such as singer Marco Pastorino (Temperance) and guitarist Franco Michelotti (Shining Fury). Soon the collaboration deepened, ideas were exchanged, and the first song frameworks developed. However, after a few years there was a bitter setback: Franco Michelotti moved to England, leaving the young project behind.
This did not stop Cristiano from composing, and soon the complete arrangements for an album were ready. During this phase he recruited Michele Vioni (Vivaldi Metal Project), one of the most talented and famous guitarists in the world. The latter recommended two other excellent musicians to him: drummer Paolo Caridi (Geoff Tate's Sweet Oblivion, David Ellefson, Reb Beach, Michele Luppi, Hollow Haze), and bassist Giorgio Terenziani (Arthemis). Both were immediately enthusiastic about the idea and joined the project. With the two keyboard acrobats Alberto Sonzogni and Luca Zanon, additional musicians were integrated into the project and the song material was finished.
Finally, a large part of the pieces, the drum part, the vocals, and also the orchestra parts, were recorded in three different Italian studios. Bass, guitars, keyboards and piano, on the other hand, were recorded in the musicians own respective studios. After the end of the recordings, Cristiano contacted Matias Kupiainen of Stratovarius, who was to mix the album. The talented Kupiainen invited Cristiano to Helsinki where they mixed the album in the 5by5 Studio. Because of the proximity to the legendary Finnvox Studios, the collaboration with Mika Jussila (Nightwish, Stratovarius, etc...) who became the mastering engineer on this album, was born. Returning home, Cristiano Filippini had an album bristling with potential in his suitcase - and got first offers from various labels right away. In the end, the decision was made in favor of Limb Music, a label not unknown in the genre of Epic Power Metal. With "The Force Within", the label will write history again, and Cristiano Filippini might have come a huge Stepp closer to his dream of becoming a Metal star.
Even though the genre is often called kitschy, "The Force Within" is anything but that. The production is superb, the compositions elaborated to the smallest detail. The melodies are catchy and the vocals with the expressive voice are brilliant. The guitar work is simply awesome. It forms the basic framework for exciting Power Melodic Metal songs like "Lightning In The Night" or "We Fight For Eternity". Heaviness and melody are almost perfectly combined. Listening to the solemn "Finding Yourself", your emotional world will be in a turmoil, and epic bombastic pieces like the album's closer "The Angel And The Faith" or "Moonlight Phantom" show a band with great technical prowess and a versatility of switching between voluminous and razor sharp, delivering songs which take you on a great musical journey. It is interesting, by the way, that the orchestral parts are used very efficiently and at the same time discreetly, rounding off the pieces to perfection. "The Force Within" is the at the top of the game in the genre of Epic Symphonic Power Metal 2020!