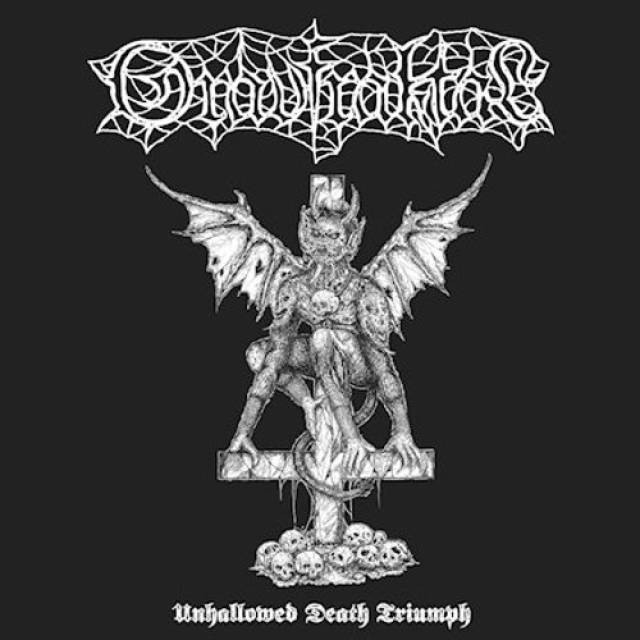 Hailing from Sweden, GRAVFRAKTAL might be an otherwise-new entity, but the band's three members collectively possess a wealth of experience that's staggering to behold. Among the members' past and present endeavors include such names as Sacramentum, Pagan Rites, Deathwitch, Swordmaster, Runemagick, Bestial Mockery, The Funeral Orchestra, Kill, Saltas, Diabolicum, Church Bizarre, Heavydeath, Karnarium, and Cerekloth.
However, GRAVFRAKTAL is its own entity, and Unhallowed Death Triumph is as much a statement of intent as it is a summation of the band's all-too-considerable powers. Indeed, a power-trio in every sense of the word, GRAVFRAKTAL unload an arsenal of physicality that spits in the face of so much cut 'n' paste studio "death metal." Indeed, this is METAL OF DEATH writ large, draped in haunting hues of malevolent melody and bruising battery, grimy and regal in equal measure. Likewise, the band's sound nods to everyone and no one, so entrenched in their DNA is olde-worlde death metal; after all, among the three of 'em, the members of GRAVFRAKTAL have participated in an enviable number of underground gems over the past 25 years and thus helped shaped the landscape of underground metal. But again, this band is its OWN entity, and this debut recording speaks for itself - commandingly!
Short and definitely very sweet at four songs in 18 minutes, Unhallowed Death Triumph is a mandatory first chapter of GRAVFRAKTAL's bound-to-be-legendary story!