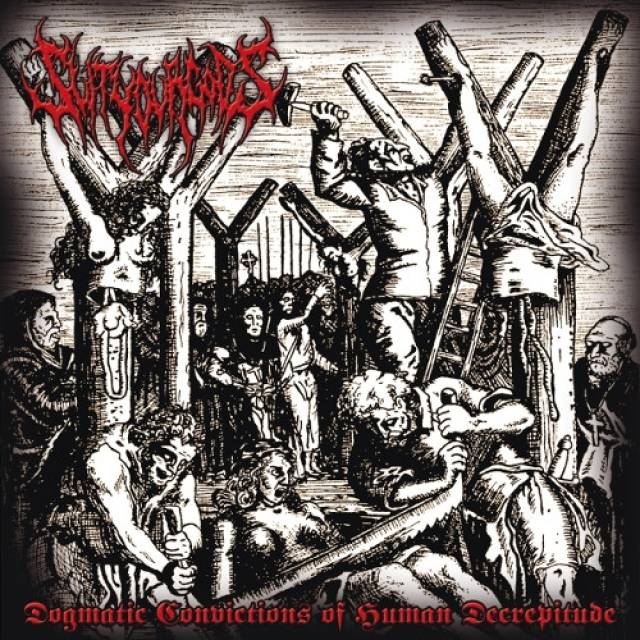 Gods – born from ignorance and fear, have become the cloak that hides humanity’s basest cruelty. Responsibility for heinous acts can be passed to the divine, wickedness presented as ‘god’s decree’. Perversions are dressed up in robes and gold finery and the profane is named sacred, as acts of sadism are committed behind the mask of benevolence. Incense shrouds the smell of corruption and sordid lust, while the smoke of candles obscures the sight of slavering arousal. Slit Your Gods are here to take you beyond the deceptive veil and plunge you, head first, into the true sickening horror of the violence behind the whispered words of prayer...
Dogmatic Convictions Of Human Decrepitude delivers three songs of absolutely relentless death metal devastation. The insanely inhuman vocals of Jordi Mora are a bastion of strength at the heart of a maelstrom of jagged, jolting riffs and frenetic, pulverising rhythms; the voice of the anti-god roaring defiance and disbelief at the temples of deceit. These songs conceal vicious hooks within their battering onslaught, irresistible riffs that will ensnare you, drag you down beneath the surface of their tidal wave of horror. ‘Scapulars Of Human Decay’ in particular presents an enticing puzzle box of beguiling progressions and a razor sharp solo that slices through the congealed black blood and thick, yellow fat like gleaming steel. Although Slit Your Gods is a new name on the death metal scene there is no disguising the skill and experience of the men who stand beneath that banner. Look closely and you’ll see bonds of blood connecting Slit Your Gods to bands like Arthropodal Humanicide, Avgrunn, Ineffable Demise and more. However, nothing in their pasts can overshadow what has been achieved in Silt Your Gods. Dogmatic Convictions Of Human Decrepitude is a monolith of brutality...and this is just the beginning.
With the unparalleled experience of Comatose Music on their side, Slit Your Gods will surely rise to dominate not only the burgeoning death metal scene of their Spanish homeland, but also make an indelible impression on fans of musical brutality around the world. It’s time to tear down false idols and unleash the power of blasphemous, brutal death!