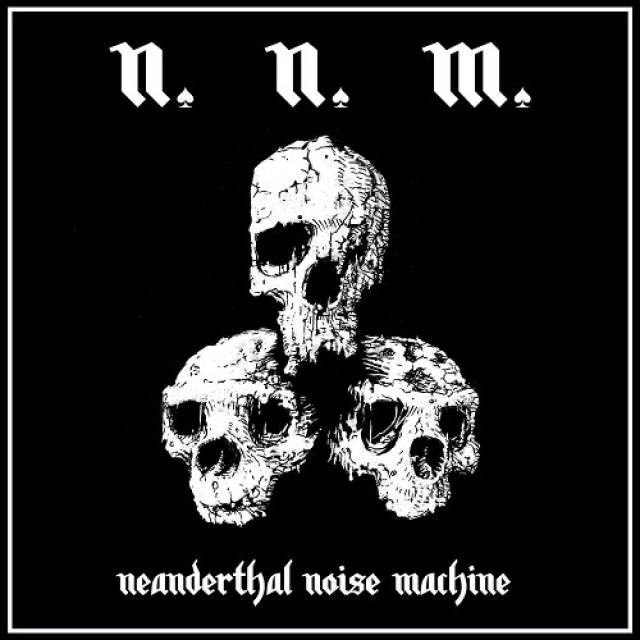 Although a brand-new entity, NEANDERTHAL NOISE MACHINE (acronym NNM) is a power-trio comprised of metal veterans: Alimai (In League With Satan, Bestial Evil), Ace (Witchunter, Bestial Evil), and Bastard (Blasphemophagher, Ripping Death, Bestial Evil, ex-Baphomet’s Blood). Knowing what they want and wanting it now, NNM mix together furious, dirty, and raw old-school metal influenced by Bronze-era Motorhead, the Fast Eddie Clarke solo project, Venom (1980-‘84), Saxon (1978-‘85), AC/DC (1975-‘79), Sweden’s Gehennah, the Mentors (1981-‘89), Discharge (1981-‘84), Fingernails (1984-‘88), Bathory (1983-‘84), Rose Tattoo (1978-‘82), Eatmyfuk, and Tank (1981-‘84).
Specific these influences may be, but they’re crucial in underlining exactly where Neanderthal Noise Machine is coming from – and where it’s going, like a locomotive to Hell. Indeed, NNM’s first strike is deadly, salaciously swift at six songs in 18 minutes, crashing the heavy metal vomit party – uninvited, of course! – and proceeding to rudely treat those partygoers, who had no justification being there in the first place. Truly, this is primordial metal for the purist, for those who uphold the law…of the unlawful, and the awful!
Just f-f-feel Ace’s monumental guitar work together with the characteristically bulldozing bass of Bastard, then further submit to the hammering drums and distinctly early ‘80s vocal style of Alimai: there’s simply no faking this; it’s got to be FUCKING REAL. The relentless riffs and rough ‘n’ tumble arrangements, combined with a direct live-recording production in the pure old-school style, altogether make NNM’s sound highly distinctive in this landscape of the plastic and disposable.
In this nowadays “metal” scene full of nice boys, NEANDERTHAL NOISE MACHINE are ready to be the bad guys in the movie of your life. From the depths of Neanderthal hell, rise with Neanderthal Noise Machine!