New album "Fall Into Dementia" out on June 16th!

Conceived in 2010, CASKET GRINDER is a Death Metal band based in Medellín, Colombia. With the sole intention to create a distinctive and super aggressive old school sound, these metal maniacs have fused elements from both the American and European Death Metal scenes to produce a tasteful cacophony of instrumental dexterity and maleficent vocals.
Fall into Dementia is CASKET GRINDER’s first full-length. The album was recorded at Umbral Estudio in Medellín, Colombia. This sonic tapestry of brutal vocals and instrumental blitzkrieg examines many aspects of what it means to be human such as despair, insanity and fear of the unknown along with delirium caused by mental disorders or drug abuse. Get ready for a deep-dive into the darker, unhinged fragments of the psyche. 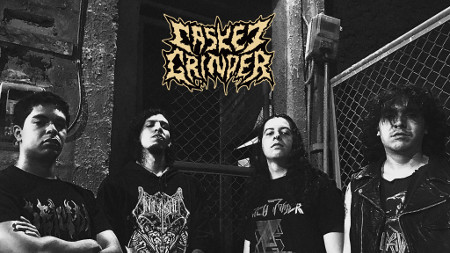 More in this category: « ALARUM VASSAFOR »