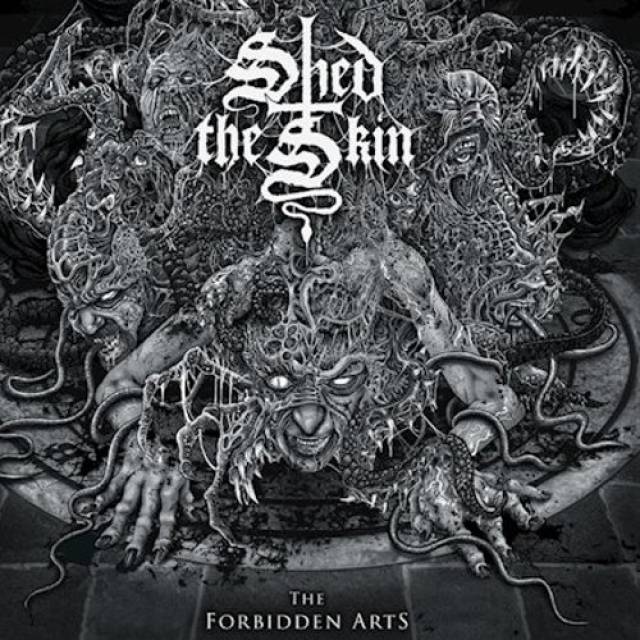 New album "The Forbidden Arts" out on June 26th!

SHED THE SKIN is a Satanic old-school death metal juggernaut, created by scene pioneers Kyle Severn (Incantation, Acheron) and Matt Sorg (Ringworm, Blood of Christ). After playing a successful memorial show to fallen friend and bandmate Tom Rojack of Cleveland’s own Blood of Christ, the seed was sown. Never forgetting Tom’s amazing talent, musicianship, and contributions to the Satanic metal of the early '90s, Matt and Kyle chose to renew that in SHED THE SKIN, aptly named after a Blood of Christ tune of the same.
After the success of that show, they briefly recruited Blood of Christ tribute member Duane Morris (Embalmer, Decrepit, Kurnugia). Sadly due to scheduling difficulties that were unavoidable, the scepter had passed. Veteran of the death metal community and longtime friend Ash Thomas (VLADIMIRS, FAITHXTRACTOR, Estuary) took up the duties of guitar/vocals. The addition of Ed Stephens (Civil Disobedience, Ringworm, Beyond Fear) and his amazing talent solidified the lineup. Even Brian Boston (From the Depths) displayed his eerie, Satanic keyboard accents and intros to the band's debut album, Harrowing Faith, as did the strings of Damon Conn (From the Depths) for their second full-length, We of Scorn.
Efforts and talent merged as SHED THE SKIN began forging their rare form of Satanic death metal. The debut recording, a 7" EP titled Rebirth Through Brimstone - recorded at Bad Back Studios in Cleveland with engineer Dave Johnson, with mastering by the legendary Dan Swano of Unisound - released in 2014 through Cleveland institution HELLS HEADBANGERS, who'd go on to release all of the band's albums.
With excitement never fading, Matt and Kyle immediately starting working on new material. The result was the creation of their first full-length, 2016's Harrowing Faith: ten brand-new songs of Satanic death. Noteworthy is one originally was a Blood Of Christ track that Matt and Tom collaborated on in years past which was lost until this release. The trend endured, and this album, like the 7”, was recorded in Ohio and mixed in Sweden. The cover art, a black & white Satanic masterpiece by James "Human Furnace" Bulloch (Ringworm), would not be the last. Nor would the lyrical contributions of Chuck Sherwood (Incantation). The support for this effort was enormous and only strengthened their convictions, as seen in written reviews or live performance.
Gaining momentum, SHED THE SKIN's second full-length was spawned, 2018's We of Scorn. Considered as melodic as it is ripping by reviewers and fans alike, another ten sonic offerings were vomited forth from the ashes of Harrowing Faith, even a re-recording of the 7” track "Luminous Transgression" revitalizing the early effort with new zeal. The monochrome sorcery of James Bulloch emblazoning its cover progressed the imagery, just as Chuck Sherwood again weaved his lyrical blasphemy. SHED THE SKIN held on to the battle-tested formula of recording, mastering, and label.
These four architects of Satanic madness - Matt, Kyle, Ash, and Ed - go forth yet again with the third SHED THE SKIN album, The Forbidden Arts, once again through HELLS HEADBANGERS. Once again recorded in Cleveland and mastered by Dan Swano, The Forbidden Arts is a testament of their talent and dedication to making Satanic death: relentless as the material they play, and so is the effort to create 11 new tracks plus a hidden cover from Matt’s 1990s band From the Depths, a tribute to their original vocalist, Cleveland’s own Jim Konya (RIP). Arguably the band's strongest material yet, The Forbidden Arts is also SHED THE SKIN's most varied work to date, including a more pronounced emphasis on haunting synth touches. But rest assured that this is still 100% SATANIC DEATH as they intended from day one - no compromise, no quarter, no wimping out. Just look no further than the cover art: another unforgettable work courtesy of James Bulloch, where the priest has indeed finally shed his skin!
SHED THE SKIN over the past years have brought their blasphemic creations to the stage, honoring their past by playing Blood of Christ material as well as current assaults from an ever-expanding discography, which will also soon see the addition of a split 7" with fellow comrades-in-death SURGIKILL. SHED THE SKIN's ambition never ceases, so be prepared to bear witness to the live death metal lacerations that will assuredly shed the skin. And in the meantime, beware The Forbidden Arts! 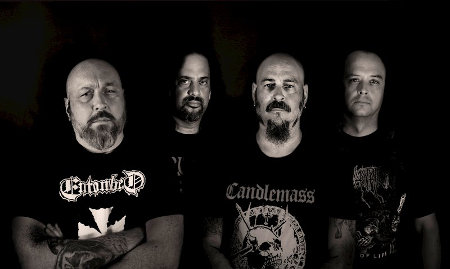