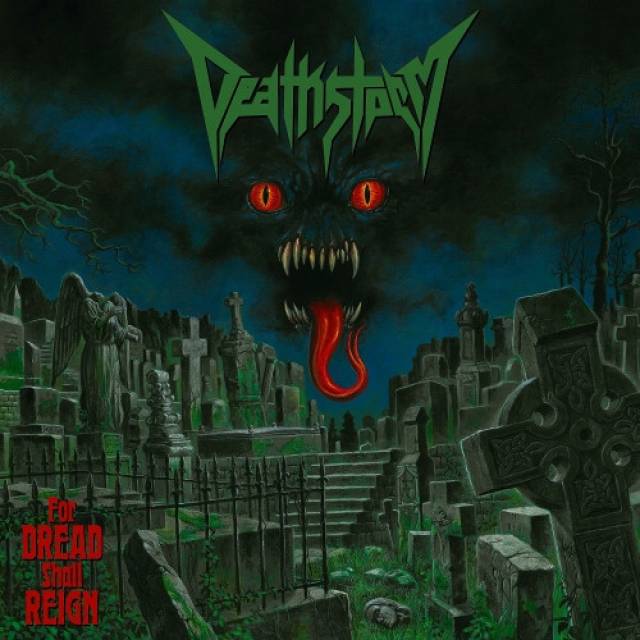 New album "For Dread Shall Reign" out on July 31st!

A veritable institution by now, DEATHSTORM have been flying the flag of hate for a decade now, releasing albums on such well-regarded labels as I Hate and High Roller. DEATHSTORM delivered a swift ‘n’ sweet EP for DYING VICTIMS titled The Gallows in 2015, and now the power-trio return to the label for their most intense and varied recording yet, For Dread Shall Reign.
Without doubt, the spectre of classic Kreator looms large over DEATHSTORM still – and why should it not, when you’re doing deathtrash this devastating? – but with For Dread Shall Reign, the band bring forth a whole host of equally classic contours. From very old Metallica to equally old Slayer on to ‘80s Death and especially Demolition Hammer, DEATHSTORM here hammer out riffs, riffs, RIFFS! But, unlike so much thrash that haphazardly seeks to simply catalog riffs in disservice of the song, these Austrian veterans thread their enviable arsenal into hard-charging, headbanging juggernauts of immediately memorable metal-mania manna. There’s nothing fancy here, no concessions toward “maturity” or “crossover” or other euphemisms for watering-down their already-heady brew; for DEATHSTORM, heavy metal is the law, and For Dread Shall Reign honors this noble ideal pairing strong songwriting with a tight ‘n’ brutal production favorably reminiscent of the late ‘80s and early ‘90s. Because DEATHSTORM aren’t broken – so don’ fix ‘em!
Social criticism, serial killers, cults, anti-religion, war…all this is grist for DEATHSTORM’s lyrical mill. What they spit out is supreme DEATH-fucking-THRASH of the highest order, because in these troubled times, For Dread Shall Reign!