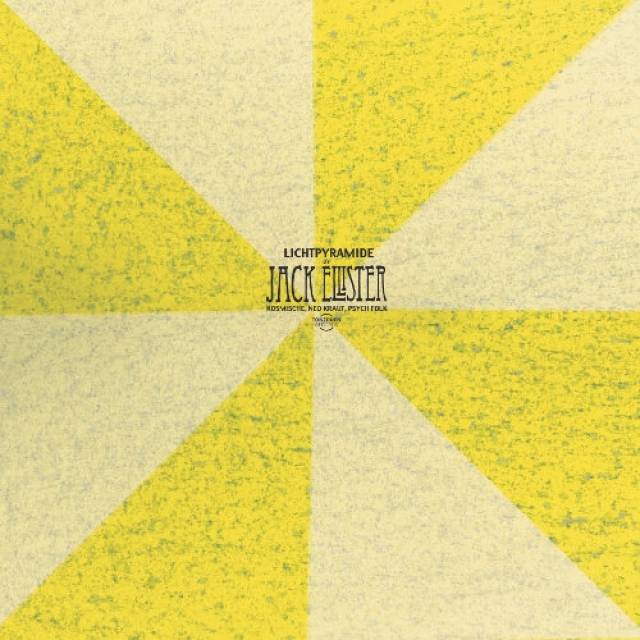 Having been featured prominently in TimeMazine, Eclipsed and Shindig! and voted favourite solo artist by the Fruits de Mer Records extended family, Jack Ellister is one of those rarefied sore thumbs sitting on the outer edges of the great psychedelic cosmos crafting wired and weird kaleidoscopic classics, with the occasional airplay on BBC radio by Stuart Maconie or Nick Luscombe.
His latest project Lichtpyramide focuses on kosmische/ kraut and is 100% instant composing (okay 98%, there’s two passages read from books), making heavy use of a 4 track loop station paired with various synthesizers, guitars, analogue outboard gear and mixer and an Otari MX5050iii eight track tape recorder. The outcome is a blend of soundscapes, short improvised pieces, musical sketches and spoken word.
The first side of this LP was released on CD-R, as a gig exclusive last November at the Fruits De Mer & Megadodo labelnight in Bristol. The second side is a selection of similar, more recent recordings, some of which were published on his Bandcamp page.
If you know his previous catalog, Lichtpyramide might surprise you (or not, as there were such bits already on his Telegraph Hill album, released on the Spanish You Are The Cosmos! Label in 2018), and hopefully pleasantly so, as Jack Ellister steps away even more from what are traditionally termed the songwriting and influences of his first couple of albums, and delves instead into experiment and improvisation.
The titles and text on Lichtpyramide are predominantly German, but there’s also Polish and English ones. This is to underline his striving for the original ambitions of the krautrock originators: to create a cosmic music, hopefully something spiritually enhancing that is free from borders or genre pre-conceptions ( at least as far as reasonable without losing it completely ). On Lichtpyramide the tracks are transitioning from one to the next without interruption, to create more the feel of a continuous journey through various areas of a constantly changing landscape.