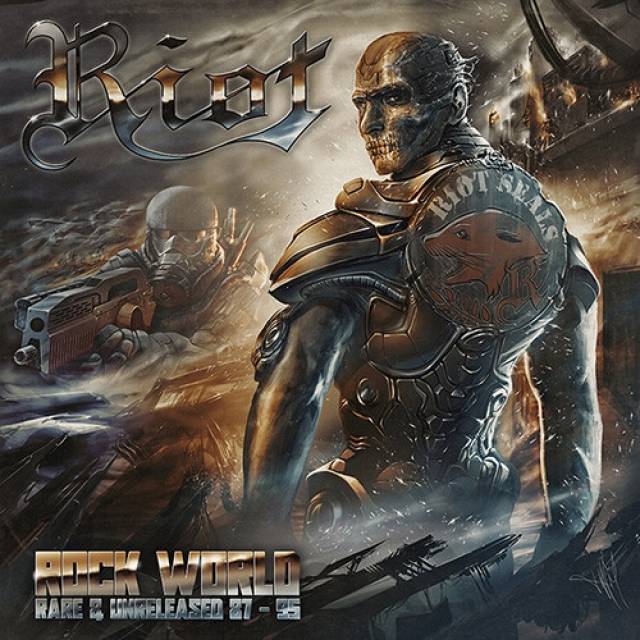 On March 27th, RIOT will release the rarities compilation album, Rock World, via Metal Blade Records.
The album features artwork by Jan Meininghaus and all songs were remastered by Patrick W. Engel.
"In Mid 2016 I was asked to organize and catalog the considerable archives of the late Mark Reale, As a lifelong Riot fan this was an exciting prospect. Little did i know this would turn into almost a year of working through cassette tapes (Mostly unlabeled), VHS cassettes and ancient reel to reel formats - from this many never heard before songs and pieces of music were unearthed, of which numerous Riot archives collections and re-issues have been released this past couple of years. This collection contains some until now unheard songs or alternate versions of classic Riot tracks." - Giles Lavery, Los Angeles January 8th 2020.

Rockworld Theme
Rockworld was a music tv show from the late 70's - Riot were approached to compose and record a track for the main theme, This track is a "Lost" outtake from the early Guy Era!

Bloodstreets (Alternate Version)
This alternate version of the classic "Thundersteel" era song has an alternate ending different from the album version, In this version the chorus repeats in a loop, instead of the guitar solo ending from the "Thundersteel" album.

Buried Alive (Tell Tale Heart) (Alternate Version)
A Different arrangement than the album version - The intro heard on the "Thundersteel" record was originally intended as the end of the song, but was ultimately moved to the start.

Runaway (Instrumental Early Idea Demo)
A fantastic instrumental from Mark Reale … The musical theme became the basis for the song "Runaway" which was released on the "Privilege Of Power" album.

Killer (Tony Moore Vocals)
This version of "Killer" differs from the version found on "Privilege Of Power" as it features Tony Moore providing all vocals, instead of the trade off with Joe Lynn Turner.

Maryanne (Rough Mix)
Maryanne is a highlight of the "Privilege" record, should have been a single/video … coulda been huge! - This rough mix shows the song in a slightly more formative stage

Medicine Man (Tony Moore Vocals)
Magic Maker (Tony Moore Vocals)
Faded Hero (Tony Moore Vocals)
"What could have been" … These 3 songs are demos recorded for the follow up to "Privilege Of Power" prior to Tony Moore departing.. the band. All 3 were recut for the "Nightbreaker" record with Mike Dimeo on vocals… this 3 track demo gives a glimpse into how things might have turned out had Tony stayed.

Sylvia (Outtake)
Good Lovin (Outtake)
Creep (Instrumental Outtake)
Three demo tracks that were from the Nightbreaker sessions, None of these made it to the final release in any of its numerous issues, 'Sylvia' could have made it to the record, it appeared years later in year 2000 as a bonus track on an unsanctioned live release while 'Good Lovin' shows the band once again experimenting with brass, finally "Creep" is an instrumental track of which little is known.

Instrumental 1994 (Brethren Outtake)
An instrumental outtake from the "Long House" sessions, never was developed any further, but cool nonetheless.

More in this category: « EILERA WALLOP »