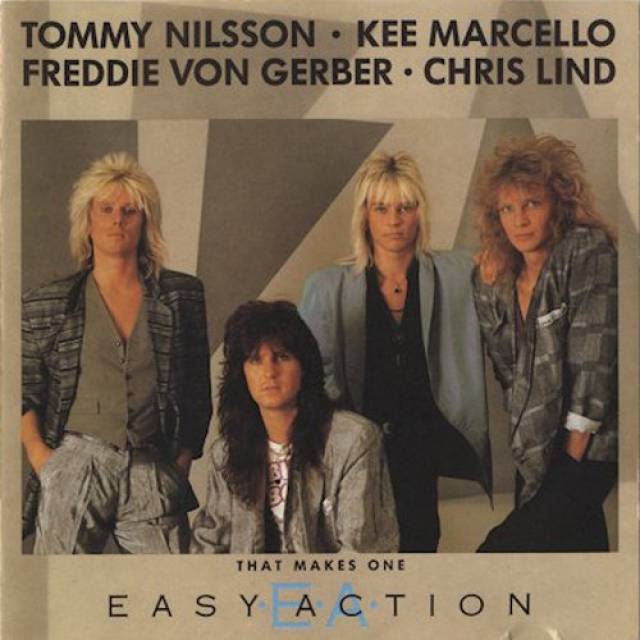 "That Makes One" re-released on January 31st!

Rarely has there been such a drastic change of musical style than that made by the Swedish hard rock band Easy Action when it came to the recording of their second album ‘That Makes One’ in 1985. While the band’s debut LP (1983) was an ahead of its time glam classic, Easy Action had morphed into a slickly melodic AOR group on the follow up record.
Kee Marcello, who later on joined Europe, was approached by Peo Thyrén (b) from the pop punk band Noice which were considerably successful at the time to sing but eventually ended up as their producer. Not willing to live the destructive lifestyle of the band, Kee and Peo founded their own band: Easy Action. The name refers to Marc Bolan who is considered the biggest rock star by Marcello. The band recorded a mini-album and got themselves a multi-million dollar deal with Sire Records. “I went from practically being homeless to being a young, stupid guy with loads of money“, Marcello recalls. Joining Peo and Kee in this early version of Easy Action were Zinny J. Zan (v), Fredrik Von Gerber (d, ex Noice) and Danny Wilde (g).
The band sounded like a blueprint for Mötley Crüe, Poison and the like and consequently wanted to go in a different direction with the follow-up. Several line-up changes came, most notably Peo eventually making way for Björn ‘Nalle’ Påhlsson and Tommy Nilsson being recruited to fill the vacant lead singer role after Zinny left. The journey together ended when Marcello was offered to join Europe - an offer to good to turn down.
Upon release in 1986 ‘That Makes One’ certainly gained its many admirers, but any success was short-lived due to Kee taking up that aforementioned offer from Europe to replace John Norum in November the same year to go on to record the ‘Out Of This World’ and ‘Prisoners In Paradise’ albums with the group. When that version of Europe went their separate ways, Marcello began a solo career in 1993 that continues to this day, alongside a lot of production for other artists.
The “glam rock variant“ of Easy Action reunited. Kee and Zinny J. Zan having recruited a first class team of players that included Simon Roxx (g), Micael Grimm (b) and ‘Grizzly’ Höglund (d) and played Sweden Rock in 2006. But the passing of Grimm in 2011 who was the driving force at the time ended the band activities, although some songs were written.
Yet in 2019 the “melodic rock version“ of the band got back together! Kee and Tommy, alongside Chris Lind (g), Björn ’Nalle’Påhlsson, Björn ‘Grizzly’ Höglund and the band’s long-time live keyboard player JörgenIngeström reformed again earlier this year when Kee received another offer to play Sweden Rock. The band recorded a live DVD and presented themselves in excellent shape, for instance using no backing tapes and stuff.
This re-release is remastered by Chris Lyne and limited to 1000 copies. As a bonus there are rare b-sides “Eye For An Eye“ from the “In The Middle Of Nowhere“ single and “There Is A River“ from the “Talk Of The Town“ single.

More in this category: « POSTCARDS FROM ARKHAM AUTUMN`S CHILD »