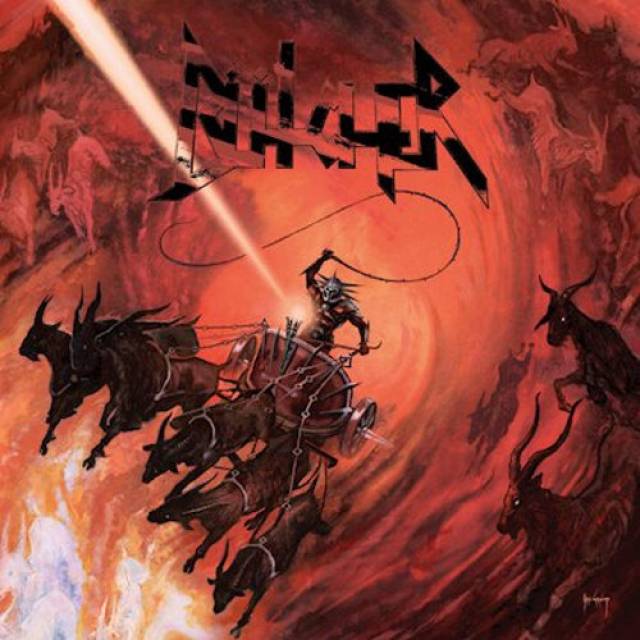 The question is not “can it be done?” The question is: “what happens when you forge classic speed metal on the anvil of wild thrash metal, and hammer it down with reckless abandon?”
And the most important question is: “What happens when you take that particular piece of glowing Steele and melt it into the same massive warhead where a mixture of occult and epic heavy metal, first-wave black metal, and guitar leads of hard-rocking magnificence are already nucleating to the point of destructive atomical power?”
The answer to these questions is BUTCHER, and BUTCHER is about one thing. One thing only. To define Metal in the way the band sees fit. Metal in the sense of the absolute riffing madness that ruled both the airwaves and the underground tape-trading scene during the late '70s, through the genre-defining '80s, and well into the early '90s.
BUTCHER’s unique blend of metal music is certainly rooted in both German and US speed metal, but owes equally as much to proto-metal, hard rock, South American and Australian black/thrash, NWOBHM both obscure and world-dominating, and the Scandinavian cult from the early '90s. To put it simply: BUTCHER operates in a spectrum influenced by the twin-lead masters from the UK – yet derives as much from the legacy of Sweden, Switzerland, Canada, and Brazil. These maniacs thrive on the combination of the musical and artistical significances we have come to adore, and deliver a furious frenzy of speed, black & heavy metal – all brewed in a cauldron of analog & vintage recording material. An acquired taste in these modern times, then, but surely to be savored by the legion of metal maniacs that have an affection for everything that made the older eras of heavy music so magical in the first place.
The band originated in the early 2000s, had several lineup changes, suffered a long hiatus… and none of it seems to matter: it brought the armored core of the band together. Since 2014, through toil and thunder, shredmaster KK Ripper and vocal performer R Hellshrieker have moulded BUTCHER into a machine of vicious and unrelenting Metal Power. Currently joined by the immense qualities of LV Speedhammer and AH Wrathchylde, the band has really formed its own identity, and the BUTCHER name is spreading like wildfire throughout the metal underground worldwide – ready to burst out!
BUTCHER is fully embracing its vision, its members willing to push through. To bring unadulterated metal pleasures to anyone that feels to crash, bang & wallop. The metal community is both united and fragmented – let others be the judge of what’s what. But during their intense live performances, the bands knows, sees, and feels the confirmation of their specific style in the reaction of the crowd. Their musical integrity stems from the conviction of crafting their wide array of influences into a premise of their own. Add to that their dedication to bring the most energetic live show one can give, and it is sparking a fire in the audience. A fire that, more often than not, engulfs in a consuming blaze of metal mania.
Consider the lack of edits, digital sound compression, or most modern recording techniques on their debut BESTIAL FUKKIN’ WARMACHINE (Babylon Doom Cult Records, 2017) and the sophomore album, 666 GOATS CARRY MY CHARIOT (to be released by Osmose Productions on January 31st, 2020). Take a look at their stage wear, taking cues from the classic acts yet adorning it with a blood oath of their own. But above all, absorb the full-on metal assault that has been edged into black wax, burned into silvered discs as well as coded into streamable format. Then you will realize: this is Metal. Metal defined. Forever in service to the ancient godz of Steele! 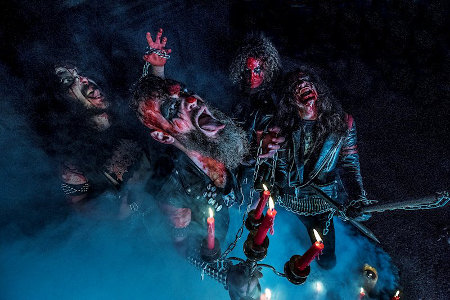