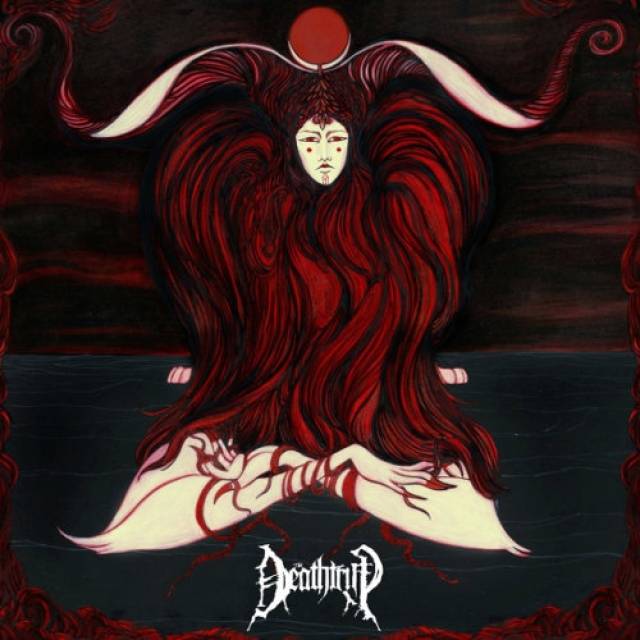 Cult Black Metal band The Deathtrip have scrawled their ghostly sigils on blood-contract with Svart Records (EU) and Profound Lore (North America) for their sophomore album Demon Solar Totem, the follow-up to 2014’s debut, Deep Drone Master. Featuring the long-due return of Kvohst (Ex-Dodheimsgard/Code) on lyrics/vocals joining the cold, hypnotic riffs of Host (Thine), the primal drumming of Storm (Ex-My Dying Bride, Blasphemer) and introducing the bass playing of Thomas Eriksen (Mork), The Deathtrip offer tickets to primeval possession and open portals to other dimensions. Demon Solar Totem captures the spirit of ancient Darkthrone, Thorns and Beherit imbued with old-English occultism and the chanting of sacred sound formulas. Otherworld Black Metal eeriness for a deep dive into spectral realms, Demon Solar Totem will be released on November the 15th 2019.
The Deathtrip began around 2003 by UK-based guitarist/composer Host, with a view to create some cold black metal tracks, evoking a feeling beyond what was generally circulating in the scene at the time. Very much a DIY project, the initial recordings consisted of songs featuring raw yet distinctive riffing over intentionally stripped down, repetitive and simplified programmed drums, combined with a raw-as-can-be ‘production’. The aim was for something hypnotic & primitive, achieved by using repetitive structures and multi-layered guitar parts. Having played the songs for a select few, it was Kvohst (Hexvessel/Grave Pleasures, ex-<code>, ex - DHG) who initially took an interest in the songs, before sending them to Aldrahn (Urarv, ex-DHG, Thorns). Upon hearing, Aldrahn instantly felt a wish to become part of the beast - the essence of the music itself being an extension of his early work with Dodheimsgard - & so took on vocal duties, as well as becoming chief lyricist. Songs were sent around to a few close associates, including Snorre Ruch (Thorns/Mayhem) who, having been impressed by the tracks on offer, expressed a great interest in helping to develop a full-length album with the band and becoming a part of The Deathtrip’s machinery.
The full album debut, already established to be titled ‘Deep Drone Master’ long before, was finally recorded, re-recorded, & mixed in these years. Dan Storm Mullins & Jon Wesseltoft had been enlisted on drums & bass, with mixing duties handled by Snorre, as well as forming the album’s sinister intro. With a lyrical exploration of twisted darkness & death truly befitting of the band’s moniker, as well as deep introspection, ‘Deep Drone Master’ was widely accepted as a cult Black Metal classic.
Taking on an even more hypnotic & mystical edge, Host’s new songs for the follow-up album to ‘Deep Drone Master’ slowly materialised over the following years. Recording eventually commenced in 2017 with Storm returning on drums. Around this time, Aldrahn had launched his new project, Urarv. With this new venture being a perfect outlet for the vocal visionary’s unique expression, Aldrahn subsequently parted ways with The Deathtrip. ?Work proceeded on the new Deathtrip recordings, along with lingering doubts about whether the second release would see the light of day, and who could do full justice to the vision of Host. In the interim, bass tracks were laid down by Thomas Eriksen of Norwegian black metallers Mork & it was then, in 2018, that talks began with the band’s original vocalist, Kvohst about the prospect of returning. Ideas were put in motion for a new journey into the spectral realms, under Kvohst’s masterfully crafted narration. Something deeper and more ritualistic, meticulous and magical started to grow. An entirely new and potent dimension was conjured around the tracks as they assumed their final form in early 2019, with the final results manifesting in second album, ‘Demon Solar Totem’.

More in this category: « IN OBSCURITY REVEALED BULL ELEPHANT »