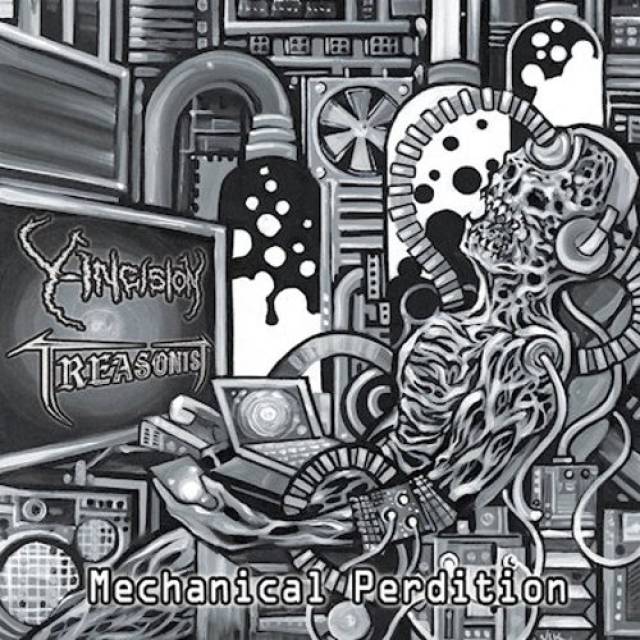 Horror Pain Gore Death is set to unleash Mechanical Perdition, the 13-track split album from Nebraska’s Y-INCISION and Oregon’s TREASONIST. Due out November 22 on CD and digital formats, Mechanical Perdition is a blasting split aimed at smashing down the walls of your social constructs!
Sleazy Nebraska grindbois Y-INCISION make their intense HPGD debut with six tracks of old school Grindcore/Hardcore/Punk madness. Oregon's own TREASONIST return to Horror Pain Gore Death unleashing seven tracks of crushing Death Metal that leaves no safe space for retreat. Mechanical Perdition is a vicious tag team assault of aggression that destroys the ills of the technological age! 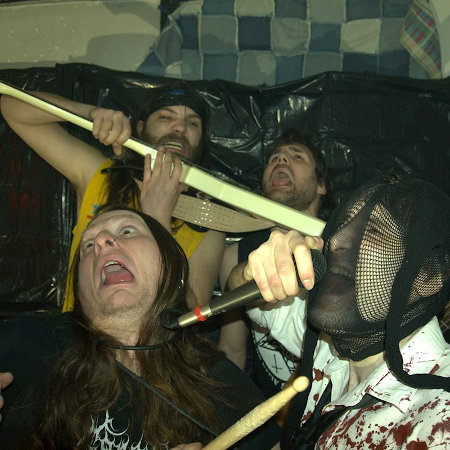 It was 2018 when the four musicians who would form Treasonist first decided to converge and create the most punishing musical conglomerate possible. From the dark heart of the Pacific Northwest, Treasonist was born, a band that combines the raw, visceral punch of grindcore with death metal's precision and technicality. The brainchild of both vocalist Pete Ponitkoff of 1990's powerviolence stalwarts Benumb, and ex-Jungle Rot skinsman Jason Borton, Treasonist's lineup was rounded out with the addition of 1913 shredder Andrew Goodman and bassist Brian Rush, previously of Blood Freak. The band promptly cut their Demonstration MMXVIII, which was mixed and mastered at Audiosiege Studios (Obituary, Pig Destroyer, Windhand) in Portland Oregon. Demonstration MMXVIII garnered the attention of Relapse's Mike Juliano, who released it via his Horror Pain Gore Death label. Shows with Enemy Soil, Antigama, Cognizant and Violent Opposition immediately followed the Demo's release before Ponitkoff announced his departure to focus on family. Realizing that Ponitkoff's unique and ferocious approach to vocals would be a difficult act to follow, Treasonist enlisted former Beyond The Red Horizon frontman Nathan Mote to fill the vocal position, and in doing so brought a whole new level of brutality to the proceedings. Early 2019 saw the addition of second guitarist Alex Johnson, previously in Reno, Nevada tech-death outfit Enslave The Creation, and writing soon began for Mechanical Perdition, a split with Nebraska grindcore maniacs Y-Incision slated for release in November. Mechanical Perdition adds an entirely new dimension of brutality to Treasonist's sound, seamlessly melding the raw heaviness of grindcore forebears Terrorizer and Napalm Death with the clinical technicality of Pig Destroyer and Misery Index. With Mechanical Perdition, Treasonist have managed to channel the greats of death metal and grindcore into an amalgamation of brutal heaviness.
www.facebook.com/treasonistgrind
www.treasonistgrind.bandcamp.com 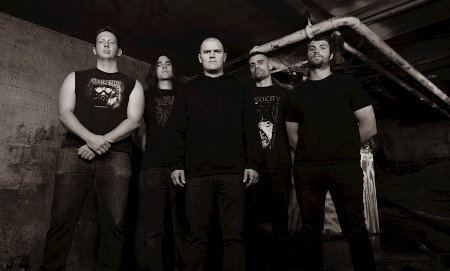 Y-Incision is a Grindcore band with influences ranging from Old-School Punk and Hardcore to current Goregrind and Pornogrind. We came together during the Summer of 2014. Mr. Rage, Big Gay and Chimmy began and went on as a three piece till the autumn of 2018 when we found a worthy bassist in Psyclopserpent. In that time we put out a full-length album "Disasturbator" (2016) and a split with KC Bois, Rimjob, entitled "Split Your Dick" (2018) all the while playing shows in our hometowns Omaha/Lincoln, Nebraska and throughout midwest USA
www.facebook.com/YIncisionNE
www.y-incision1.bandcamp.com

More in this category: « RAGNAROK KONVENT »