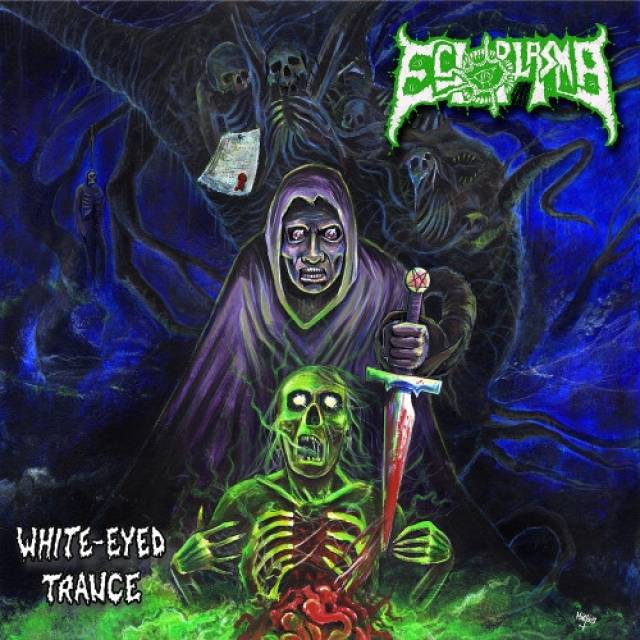 In their endless quest to push and support current underground acts that perpetuate the odor of vintage death metal, on October 31st, Memento Mori is proud to present Ectoplasma's highly anticipated third album, White-Eyed Trance, on CD format. Repulsive Echo Records will be handling the vinyl LP version, which will follow later in the year.
Hailing from Greece, the band was initiated by Giannis Grim (Carnal Dread, Humanity Zero, Death Trap, Vultur) and George Wolf (Forced In, Dismal Chant, Vultur) when Carnal Dread and Forced In shared the bill at a local show back in the grip of winter of 2012. Both musicians being real zealots of what death metal was known for back in the late '80s and the early '90s - in other words, no tech wankery and no crystal-clear production - they rapidly entered the studio just to start jamming, and ultimately gave birth to Ectoplasma.
Shortly after, the Everlasting Deathreign demo was discharged upon mankind, granting the band some following among diehard fans of unpolished death metal. On subsequent releases (the Spitting Coffins debut album and the split tape with Hatevomit), the band kept on perfecting their craft and obtaining more adherents of their underground creed, reaching a more mature sound by the time the Skeletal Lifeforms EP was released in late 2016 (tape format) / early 2017 (CD format), in which Ectoplasma shamelessly manifested their devotion to muddy, organic, disgusting, bone-breaking, and rotten-to-the-core DEATH METAL influenced by the early offerings of bands such as Autopsy, Baphomet, Asphyx, Morta Skuld, Grave, Demigod, Gutted, Death, and Judecca, only with their own personal twist.
With the addition of Dion K. Alastor (Vultur) on guitars and Giannis Botsis (Embrace of Thorns, Thou Art Lord) on drums, it was with 2017's Cavern of Foul Unbeings - released to international acclaim by Memento Mori, the band's current label home - that Ectoplasma kicked their crusade against inane, overproduced "death metal" into overdrive. Reeking of the same characteristic grime and decrepitude of that album, the band's third, absolutely gutsfucking full-length, White-Eyed Trance, sees Ectoplasma entering concept-album territory. Say what?! Rest easy, diehards: the same punishing 'n' pustulent, proudly DEATH METAL sound is presented and accounted for here, only that the "concept" is a lyrical theme threaded through their now-signature world-eating sound. Just as aptly titled as its predecessor, White-Eyed Trance is an unabashed statement of classic death metal songwriting, hearkening back to a time ("long, long ago"!) when bands wrote actual SONGS rather than tossing a bunch of haphazard riffs into a blender and seeing what came out. As such, Ectoplasma patiently build their towers of lurching dread and lace them with well-timed bouts of blasting, but always in the service of the song. If anything, their crunch 'n' crush is a bit clearer now, thanks in no small part to powerful mixing & mastering by Robbert Kok (of Disavowed fame).
Finished off by awesomely retro, luridly colored cover art by the masterful Mortuus and a well-chosen cover of Devastation's "Souls of Sacrifice," White-Eyed Trance is yet another timely reminder from Ectoplasma that the past is alive - and it's more horrific than ever! 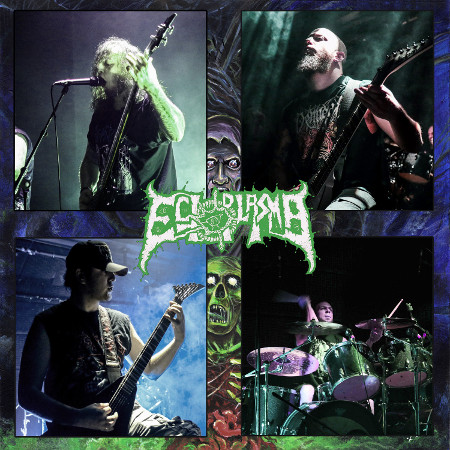