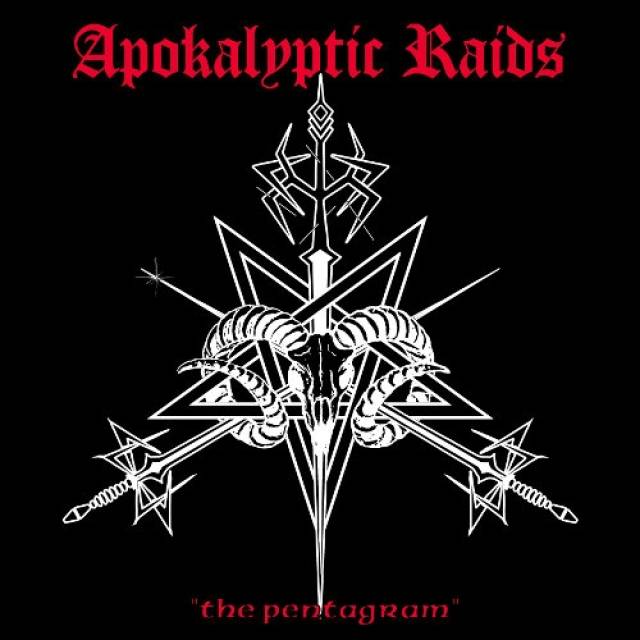 Hells Headbangers sets October 11th as the international release date for Apokalyptic Raids' highly anticipated fifth album, The Pentagram, on CD, vinyl LP, and cassette tape formats.
A veritable underground institution, Apokalyptic Raids have become a hallowed name among diehards the world over for one simple-but-special fact: they started as an unapologetic Hellhammer-worship band (and very early Celtic Frost, too) but have transcended their obvious influences into something that actually adds to that legendary canon rather than merely ripping it off. And, as of this year, they've been gloriously succeeding for 20 years now.
Although these Brazilian bastards have released a half-dozen EPs the last five years, it's been a far-too-long eight years since the last Apokalyptic Raids album, Vol. 4 - Phonocopia, so to say that The Pentagram is long overdue is quite the understatement. And of course, they DELIVER, which is not surprising given that they've gone back to the classic 2004-2007 lineup of Leon Manssur "Necromaniac" on guitars and vocals, Vinicius Canabarro "Hellpreacher" on the bass, and Pedro Moraes Rocha "Skullkrusher" on the drums.
"The last 10 years have been a blast here," explains Manssur. "We did extensive touring -Brazil three times, Europe twice, South America also twice, many one-off gigs - yet we stayed behind in renewing our discography. Don't get me wrong - composition went on frantically. We took notes and demoed many ideas. Sincerely, this album is just a (new) beginning, and the next one is already on the make..."
Adorned with characteristically iconic artwork courtesy of close comrade Umberto, The Pentagram is indeed a new beginning, but one that reverently adheres to Apokalyptic Raids' iron-clad past. Perhaps not surprisingly, the album's compositions span a good decade and a half - "There are songs from last year, and there are songs that were composed 10+ years ago," Manssur reveals - but as always, it sounds 666% like Apokalyptic Raids. Tons of galloping hard-chargers, lots of dirtiness, more metal attitude than is healthy, and even a moody epic in closer "The Story of Pope Joan": no fucking sellout, and no quarter given.
"With all the things that happened inside and outside the band, the idea of starting anew has grown up," Manssur continues. "We hate those albums when the band thinks they have become more 'mature' and then...wimp out. Wimping out is a consequence of ego shit. No, not again in this scene today, not in 2018. Meanwhile, many bands of the 2000s generation went on to greatness, and that raised the ante in a way that pushed us forward."
Within their now-sizable catalog, especially one so rich with rottenness, it's both comforting and freshing that Apokalyptic Raids would make their long-awaited return to the full-length front one that's purely "back to basics." And it's not just idly titled, either, as Manssur explains: "The new album being simply called The Pentagram is a statement of simplicity, less is more, keep it simple, rustic - whatever you call it. And yes, still tuned to E flat, so it's safe to hear and being able to get the riffs. It's all about the riff - old as fuck and fresh as fuck!"
He adds, "Of course we have took risks. There is an epic heavy metal song, like some pieces we did before, but with new twists. The planning was long, the execution was quick, and that's it. We always try to get a good balance of 'quick gratification,' though not instant, and 'risk.'"
Lastly, there are the lyrics to The Pentagram. Concludes Manssur, "Fenriz [Darkthrone etc] once wrote we were doing more personal lyrics. And that is true, given we are old metalheads full of shit, except that we don't want to get stuck there and to preach too much. So, on this album, you will find statement after statement of 'upward' feelings - the words 'victory' and 'triumph' are recurring. Not that it could ever spoil the anger! Strange in a Hellhammer-worshiping band? Maybe, maybe not. And I love/hate playing a nameless style. It is and it is not black, death, heavy, speed, thrash, etc. It's HELL. It's HELL Music. Find that out, love it or hate it - danger is a good part of the fun." 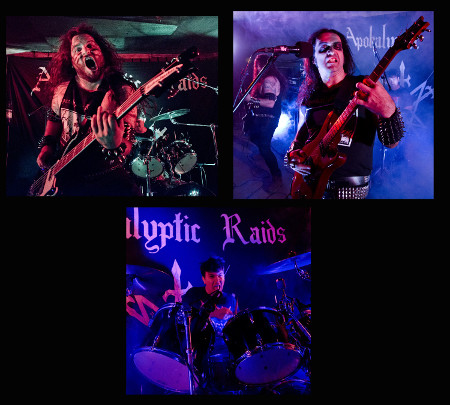