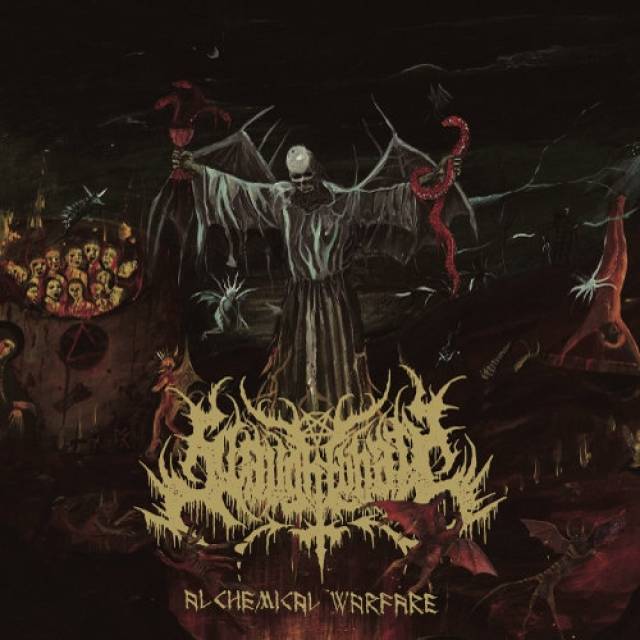 Hells Headbangers sets September 6th as the international release date for Slaughtbbath's long-awaited second album, Alchemical Warfare, on CD, vinyl LP, and cassette tape formats.
For a decade and a half now, Slaughtbbath have prolifically pursued a fierce 'n' fiery vision of total black/death METAL. With a rich yet uniformly exemplary discography, this power-trio have laid waste to the underground across a myriad demos, splits, EPs, and 2013's now-classic debut album, Hail to Fire. Allied with Hells Headbangers since 2016, a split 7" with Grave Desecrator followed that summer, with September 2017 seeing the release of the Contempt, War and Damnation compilation, which precluded the band's first-ever North American tour alongside fellow Chilean labelmates Communion.
Slaughtbbath have kept quiet since then, studiously brewing the firestorm that is Alchemical Warfare. A consolidation of the band's beyond-considerable strengths as well as an extension of them, Alchemical Warfare was recorded, mixed, and mastered by Pablo Clares at DM6 studio in Santiago, Chile during 2017/2018. Here, Slaughtbbath are at the peak of their powers, pulsing with both bestiality and burliness alike, and yet exhibiting a nuanced songwriting nous that is second to none. Their sulfurous maelstrom is a veritable meat-grinder of South American darkness lo these past four decades, both reverent of the past whilst forging an even-darker future, and Alchemical Warfare finds the band hitting a fever pitch, its nine-song/36-minute runtime both succinct and satisfying. Each track invokes utter possession - a hypnotic diabolism, perhaps, in spite of the often-frantic tempos - but Slaughtbbath possess the prolific experience to convey that diabolism in a dynamic manner. If anything, Alchemical Warfare is the band's best-produced record to date, and a survey of its song titles suitably convey the occultic austerity within: the title track, naturally, as well as the closing trifecta of "Amulets of Carnage," "Celestial Overthrow," and "Ascension to the Dragon's Throne," as well as the ever-epic "Rejoined Into Chaos."
However, especially at this point in time and the career high-point that is Alchemical Warfare, it is important to underline the unique differences in Slaughtbbath makeup. For one, the band hail from San Vicente de Tagua Tagua, a small countryside town with no scene at all, whereas most Chilean bands hail from the bigger cities; in fact, early on, Slaughtbbath were branded "rural black metal" when they played live. Secondly and relatedly, they've not once ever strived to "sound South American," much less do there exist any other Chilean bands doing a similar thing musically or lyrically. Lastly and perhaps most importantly, Slaughtbbath have maintained a solid lineup and kept up constant activity - both on record and on the live front - all these years while most bands disappear, fade, change members, come back, or form new bands with the same lineup to fit into the new trend. The Slaughtbbath name is thus iron-fisted, inexorable, and immaculate
With more eyes than ever on the Chilean black/death scene, it's high time that the leaders separate themselves from the followers. Slaughtbbath firmly and furiously take the torch and lead the way forward with Alchemical Warfare. 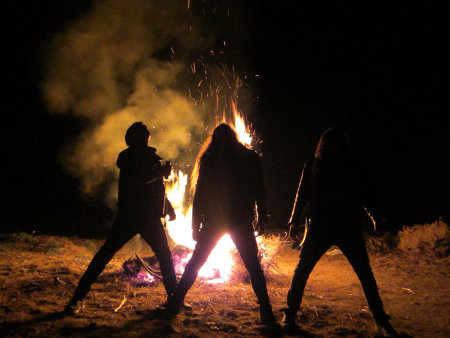