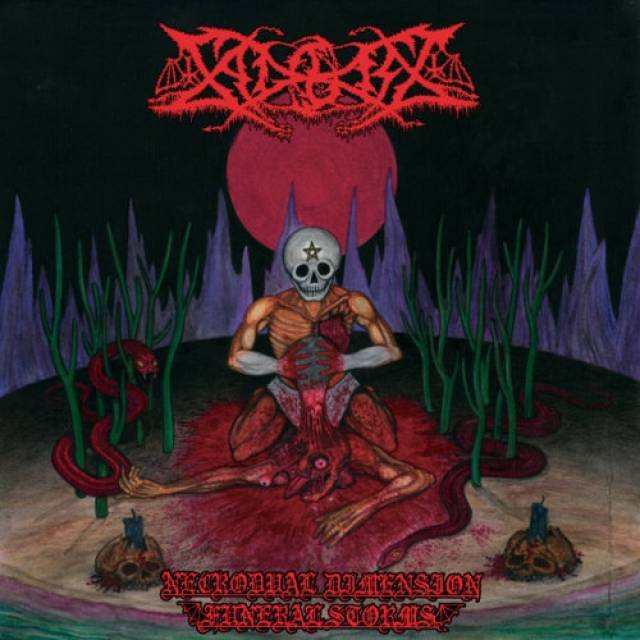 Hells Headbangers sets August 30th as the international release date for  Sadokist's highly anticipated second album, Necrodual Dimension Funeral Storms, on CD and vinyl LP formats.
Sadokist formed in 2007 and have lurked deep in the fertile Finnish underground since 2007, brewing up demos that pronounced its foremost aims: the telltale Evil Sado Fuckin' Metal in 2008 and 2010's Horrors From Hell, with a split tape in between with comrades Black Angel fittingly titled Sadomatik Angel Attack. A couple more demos followed in 2012, and all this hard graft eventually culminated in the opus of obscurity now known as Thy Saviour's Halo, Held by Horns, the band's cult-classic debt album from 2014. Deeply and reverently committed to their classic forebears - from the early Big Three of Teutonic thrash to the first explosions of filth from the '80s South American underground, not to mention the almighty Bathory and Necrovore - Sadokist nevertheless exude an effervescent elan and caustic, careening charm that immediately put them well beyond mere "retro" retread. In fact, their youthful vibrancy put Thy Saviour's Halo, Held by Horns over the hump of over-familiarity and into a realm populated by the likes of Nifelheim, Desaster, and Aura Noir, such is the strength of Sadokist's songwriting.
Now allied with longtime fans Hells Headbangers, Sadokist are prepared to unleash their second full-length nuclear detonation: Necrodual Dimension Funeral Storms. An intensification of Saviour's Halo, Held by Horns in every way - more violence, more finesse, more speed, more ominousness, more of MORE - Necrodual Dimension Funeral Storms is a crude 'n' rude plunge deep into the depths of Satanic speed metal HELL. The album was recorded at the band's rehearsal space and then finished at Megahammer's home studio during 2017-2018; as such, it retains a touch of the caustic rawness of their debut album whilst exhibiting more clarity that thankfully doesn't dampen their ever-burning fires. In fact, the pronounced up-ratcheting of execution brings their effervescent furiousness into greater focus, allowing these anthems to bring bountiful diabolism and a perverse joy to any listener infected with Sadokist's salacious charm. Or, put another way: mandatory headbanging shall spill over into total and utter possession, and the effect shall be instantaneous as well as long-lasting.
Teetering on the edge of the abyss but exhibiting a mastery beyond compare, Sadokist shall lead you into Necrodual Dimension Funeral Storms.

More in this category: « SABOTAGE GRABUNHOLD »