"The album format is important!"

As rock superstars Def Leppard return with a brand-new album, ‘Diamond Star Halos’, vocalist Joe Elliott insists that the album format is still important – at least for Def Leppard!
“When we got together in 2014 we noticed a trend of people releasing one song a month,” Elliott tells Rock Candy Mag writer Jon Hotten in an exclusive cover story that runs over 12 pages in the new issue of the magazine.“They might bang them all together on an album two years later. Other people were just doing EPs. Maybe for a younger generation, an album isn’t important, because they didn’t grow up when it was. But we did. We grew up in the era of ‘Ziggy Stardust’, ‘Dark Side Of The Moon’, ‘Goodbye Yellow Brick Road’ – the greatest double album of all time in my humble opinion. That’s where we come from. You can’t unscramble an egg. We invested in laying on the bed and looking at the sleeve, reading every word.”
Hotten also interviews Rick Savage for Rock Candy Mag and finds that the Leppard bassist is particularly excited about the fact that Leppard’s new music on ‘Diamond Star Halos’ takes him back to his youth.
“There’s still a feeling of the early ’70s to the new album for me, when you’re just approaching teenage years and everything’s great,” he tells Hotten. “It’s fresh, it’s new. For us that’s anywhere between 1971 and ’74, when colour TVs were coming into homes, bands were getting more outrageous with their clothes, songs were getting more produced, sounding better. We were gravitating toward the pop side of it – Eagles, Elton John, Fleetwood Mac… For me there’s a lot of that type of ’70s in the new record. A lot of it has such a nice flavour of our teenage years.”
The band will begin a US stadium tour with Motley Crue in Atlanta on 16 June, but don’t expect Leppard to be playing lots of songs from the new album at the expense of Leppard classics.
“I don’t think many legacy artists perform new music,” says Joe. “We do. We play new stuff, but it’s horses for courses. Leppard fans want ‘Photograph’. They want ‘Pour Some Sugar…’ Only a fool goes, ‘I’m gonna play you my entire new album.’ Anyone who goes, ‘Here are 12 songs from my new album’ is going to clear the dance floor. Don’t batter people with the new sh*t. If it’s good enough, let it become part of the set further down the road.”
Read this 12-page Def Leppard feature and many other fascinating stories including Yes, Kiss guitarist Tommy Thayer, and The Greatest Double Live Albums Of The ’70s in issue 32 of Rock Candy Mag. 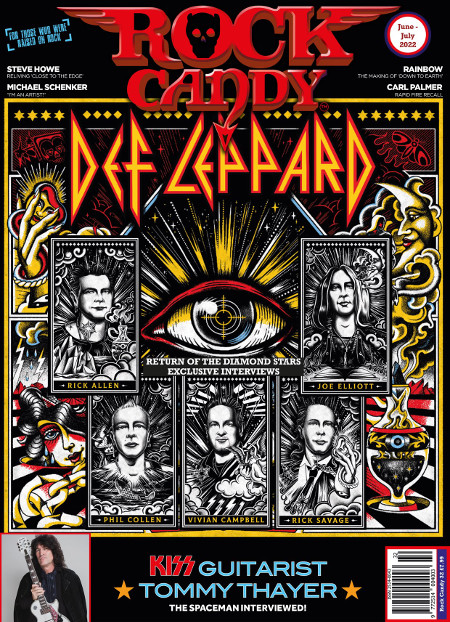