Styx feature on the cover of issue 27 of Rock Candy Mag in a 16-page extravaganza featuring interviews with all six members of the legendary Chicago band. And guitarist and vocalist Tommy Shaw doesn’t pull any punches when addressing the thorny issue of the lack of recognition the multi-million selling band has received from the Rock & Roll Hall Of Fame. Despite being one of the most commercially successful acts of the ’70s and ’80s, thanks to hits such as ‘Come Sail Away’, ‘Babe’, and ‘The Best Of Times’, Styx remain unheralded by the Cleveland institution.
“Well we’d love to be in it,” admits Shaw in an exclusive interview with Rock Candy Mag writer Malcolm Dome. “But I certainly don’t lose any sleep over it. To be honest I hope we get inducted after I’ve died. Then at least I won’t have to pay $5000 for the ‘honour’ of attending the ceremony. Or $10,000 if I want to take my wife!”
Despite the fact that there have been over 300 inductees – including acts such as Bon Jovi, Cheap Trick, Def Leppard, and Journey – since the Rock & Roll Hall Of Fame was established back in 1983, Styx still haven’t been honoured. “That’s an absolute travesty,” says Rock Candy Mag editor Howard Johnson. “Styx was one of the first US bands to blend progressive rock with AOR, and the commercial success the group achieved pays testament to the special place they hold in the hearts of all rock fans. With eight Billboard Top 10 songs to their name and over 54 million albums sold worldwide in a career spanning almost 50 years, not to mention a fantastic new album ‘Crash Of The Crown’, what more does this band have to do to get the recognition they so richly deserve?”
Styx may have been ignored by the Rock & Roll Hall Of Fame, but not by Rock Candy Mag. Over 16 pages of their latest issue the publication not only brings you exclusive interviews with Tommy Shaw, James ‘JY’ Young, Chuck Panozzo, Lawrence Gowan, Ricky Phillips, and Todd Sucherman, but also asks band members who were there at the time to dissect four of the band’s classic releases, ‘The Grand Illusion’, ‘Pieces Of Eight’, ‘Cornerstone’, and ‘Paradise Theatre’. If you’re a Styx fan, this is an issue you simply can’t miss.
Read this and many other fascinating stories in issue 27 of Rock Candy Mag.
Rock Candy Mag is a 100-page, full-colour bi-monthly rock mag, created in the UK. It covers the sights, sounds and smells from the greatest era in hard rock music, the ’70s and ’80s. Put together by respected UK rock journalists Derek Oliver, Howard Johnson and Malcolm Dome – all frontline writers for the legendary Kerrang! magazine in the golden era – Rock Candy Mag is available in print format with a free digital download version for anyone who buys the mag online at www.rockcandymag.com. 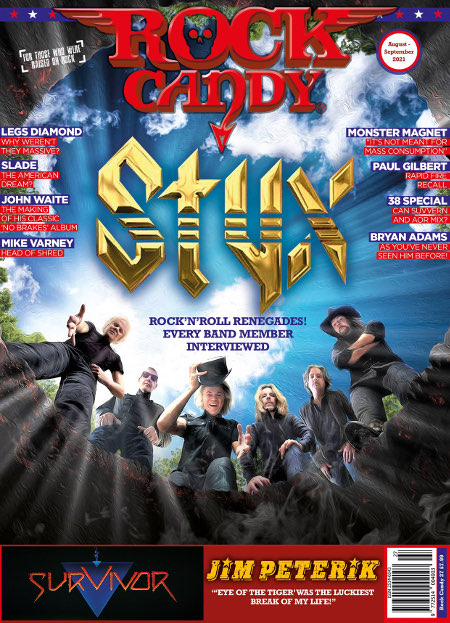 Rate this item
(0 votes)
Tweet
More in this category: « …AND THE R.A.F. FROM ENGLAND SHOT THEM DOWN BILLY GIBBONS »