"In March 2017, the Graham Bonnet Band went to Japan for our first headline dates as GBB. We also did a full Alcatrazz set that same night featuring Gary Shea, which was released last year by Frontiers, titled “Parole Denied” and included a bonus album of some Alcatrazz rarities. For the GBB part of the show, we put together a great setlist covering the main eras of my career. It was a great night and this live album and video look fantastic...I’d say it’s the definitive Graham Bonnet Band live/video release. Great light show, visuals and sound. This was and is intended to be the companion piece to the Alcatrazz “Parole Denied” live release taken from the same night. As a bonus, we have included a revised studio version of the GBB song “The Crying Chair," says Graham Bonnet.
On March 16, 2017, the Graham Bonnet Band played a very special show in Tokyo, Japan. The set included songs from the band’s repertoire alongside a number of Rainbow, MSG, Impellitteri, and Bonnet solo classics. It was a unique setlist and show, a chance for fans in attendance to experience a number of hidden classics from Graham Bonnet’s repertoire that covers his 40+ year career in the rock ‘n roll business.
"Live In Tokyo 2017" can be considered an accompanying piece to last year’s “Parole Denied – Tokyo 2017” release from Alcatrazz. To refresh your memory, founding Alcatrazz members, Graham Bonnet (vocals), Jimmy Waldo (keyboards) and Gary Shea (bass), reunited after 33 years for a unique series of shows in Osaka, Nagoya, and Tokyo, Japan in March 2017, during Graham Bonnet Band's tour of Japan. 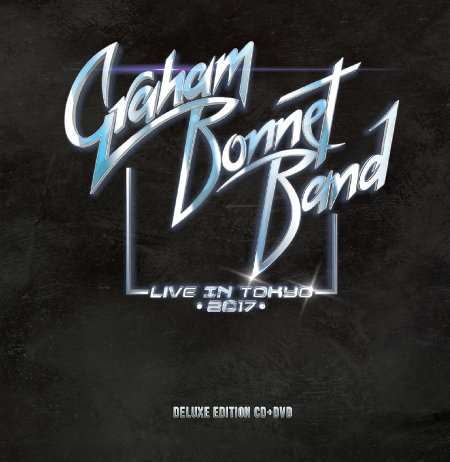 More in this category: « SAXON SONS OF APOLLO »