New album "The Quest" out on October 5th!

From the rugged coast of British Columbia, Canada, Celtic metal songstress, LEAH, is making waves across the globe. From ethereal ballads to folk-tales, mysterious world instrumentation and operatic blast beats, LEAH’s voice is a breath of fresh air among a sea of female-fronted rock.
Her debut self-released album "Of Earth & Angels" received international critical acclaim, landing her on "The Best Symphonic Metal Album" Metalstorm Awards for 2012. Later in 2013 [re-issued in 2014], the EP "Otherworld" released, featuring an appearance by Eric Peterson [Testament, Dragonlord] with vocals on the ethereal track "Dreamland".
"Otherworld" followed in the same steps as the debut, but took everything a step forward and gave us a hint on what was next to come with LEAH's heaviest album "Kings and Queens" released in 2015. Many musicians from around the world contributed to this album, such as Barend Courbois [Blind Guardian], Timo Somers [Delain], and Sander Zoer, all of whom have contributed to LEAH's upcoming album "The Quest."
LEAH’s upcoming album "The Quest" is gaining immense support. With a strong Celtic & Fantasy connection, some prog rock elements, ethereal ambiance, combined with traditional Symphonic Metal elements, this is an album LEAH is very proud to present.
The new LEAH album is a full-scale international effort by 9 individuals. Troy Donockley of Nightwish plays the pipes & flutes, Barend Courbois of Blind Guardian on bass, Timo Somers on lead and rhythm guitars, Sander Zoer on Drums, and Chen Balbus of Orphaned on the Saz and Oud.
The masterful Jacob Hansen, known for his crisp and heavy metal sound, mixed "The Quest" to perfection. And the talented Jan Yrlund created all the artwork for this album and completes the experience by adding perfect visuals to represent the songs and the journey they will take you on.
The concept for this album is very simple: we're all on a journey, and sometimes we lose our way. There are adventures, wildernesses, treasures, monsters, looters, people out to send us down the wrong path. Through it all, we must grow in wisdom and experience, find our compass once again and find our way back to the true path in order to reach our full potential: our destiny. 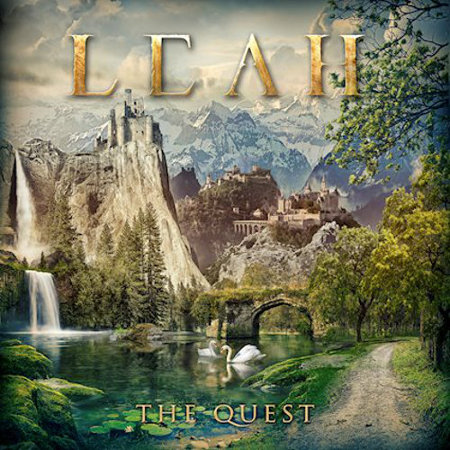