The band begins a new chapter of their career with their fourth full-length album, “Virtual Hero Society” (aka VHS) on ROAR! Rock Of Angels Records. This is their first full-length since 2014’s “Let’s Get Serious”, and their second release on ROAR! Rock Of Angels Records, the first being Destination: Overdrive - The Best of Outloud, which featured their popular cover of the Pointer Sisters' hit “I’m So Excited”, in 2015. This time, with the album title, theme and title track and first single, "Virtual Heroes", OUTLOUD abandons their general "playful" approach and goes toward deeper subject matter, tackling what could be called the "double-edged sword" of technology in today's society, as evidenced by the album cover.
Chandler Mogel, the American lead singer of the band, comments on the albums concept: "I know that Outloud of course is known for all our good time rock and roll and party vibe and all that, however this is a very important subject that needs to be addressed to the masses. "Cell phones and social media in general are very convenient and allow us to communicate to a broader audience , however they have some negative aspects which stem from misuse that not all people may realize. We hope to do some good for the society at large by giving back an important message in that we really want people not to abuse them nor do we want people to lose their humanity for one another, because they are so "zoned out" by their phone screens, etc. Take the time to reach out and touch someone - for real."
According to Bob Katsionis: “This time we tried to achieve the most difficult task of all: to have a personal sound that reminds of no other production in the genre, by combing the best of the analog world with the big disco snare drum sound and the analog mixing with the virtues of the new age with synthesizers, distorted basses and metal guitars! Same thing we did with the title of the album: the nostalgia of the VHS tapes-era that also translates to the harsh reality of the Virtual Hero Society we live in!” 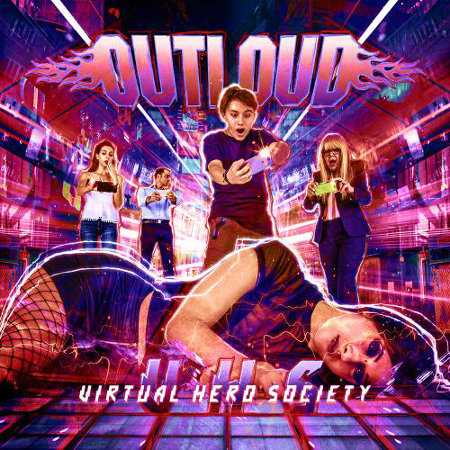