New album, "Dislike To False Metal", out on March 10th!

Masters of parody-infused heavy metal NANOWAR OF STEEL are thrilled to announce their fifth studio album, Dislike To False Metal, out March 10, 2023 via Napalm Records. Gathering their genius minds for the next chapter, the level of their comedic delivery has risen to its very best. With featured guests like Sabaton singer Joakim Brodén, the band puts the multi-faceted and much too often self-important universe of modern heavy metal to the test with this collection of ten entirely brand new tracks.
NANOWAR OF STEEL on the new album:
“Dislike to False Metal is our declaration of digital indignation to all that isn't as metal as we would like it to be.
We're getting old and slowly becoming metal boomers, roaring through the net disliking, unfollowing and unsubscribing all that is False Metal.
Though the album itself is full of non metal influences - like swing and Backstreet Boys - the backbone of our music is still made out of pure stainless steel!”
Gaining millions of views and streams with their famous hits “Norwegian Reggaeton” (ft. Charly Glamour & Gigatron), “Valhalleluja” (ft. Angus McFife) and the party song “Uranus” (ft. Michael Starr), NANOWAR OF STEEL are ready to prove their status as one of the genre’s most unconventional bands to watch. With their fifth studio album, Dislike To False Metal, the band arrives with a disturbingly addictive collection of entirely new tracks. Expertly exploring a mind-boggling amount of entirely different metal subgenres on 10 hilarious anthems, NANOWAR OF STEEL never cease to amaze with an equally-impressive dose of intelligently fresh comedic delivery that’ll have listeners rolling with laughter, and undeniable songwriting skill that’ll have their fellow genre-mates scheduling more practice sessions. Dislike To False Metal is beyond a comedy album - it’s a disconcertingly masterful showcase of above-the-bar musicianship, creative lyricism and boundless imagination.
NANOWAR OF STEEL raises the curtains of Dislike To False Metal atop the seven seas with “Sober”, marauding as the world’s first health-conscious, mineral-water chugging pirate metal collective on the hunt for Bitcoin treasure! "Disco Metal" pays homage to the club sound of the 90s with a metal techno rager for undead partygoers clamoring for a scary good time. Keyboard warriors around the world will unfollow NANOWAR OF STEEL after being triggered by “Metal Boomer Battalion”, but only after powering through maritime metal masterclass "Pasadena 1994", as combat-ready Sabaton frontman Joakim Brodén tells the harrowing tale of one of the most heroic battles ever fought in the infamous summer of 1994… when Italy faced Brazil in the World Cup soccer final, of course! These soon to be earworms are just a taste of the tear-jerking hilarity to be found on the album, as NANOWAR OF STEEL’s dual mastery of comprehensive, eclectic performance styles and quick-witted, satirical concepts makes Dislike To False Metal a sonic metal meme worth posting about - and then some! 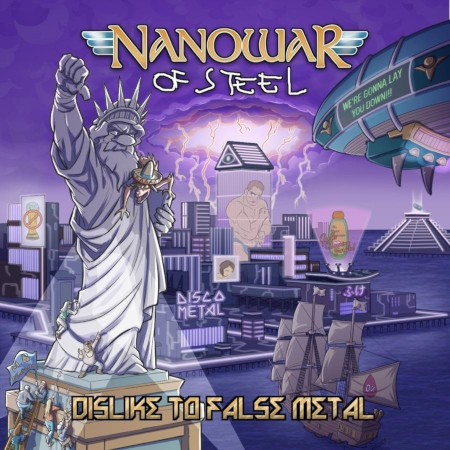