Sumerlands return with their first album in 6 years via Relapse. In the driver’s seat is renowned producer and guitarist Arthur Rizk who polished these eight metallic gems at Philadelphia’s Redwood Studios with his brothers in Sumerlands. Coming off of recent production credits with Candy, Kreator, Soulfly, and Show Me The Body, Rizk needs no introduction. His past work and expertise behind the boards with Power Trip, Ghostemane, Code Orange’s Grammy nominated album, Forever, Sacred Reich and many others have blown minds for over a decade. But it’s Sumerlands that truly fulfills his dream of melancholic chug.
The Sabbath-inspired haze of their 2016 S/T debut has been turbocharged with bigger riffs, distinct, Jan Hammer worthy synths, and forays into Badlands gone doom. But although doom crackles at the edges of Dreamkiller, this is classic, melodic metal forged with the melodrama of the Scorpions, the emotional heft of Foreigner, with an extra dose of depression.
The band’s alchemy is on full display throughout Dreamkiller as bassist Brad Raub (Eternal Champion) smirks behind his P-Bass while drummer Justin DeTore (Innumerable Forms, Dream Unending) stares you dead in the face, swinging. New vocalist Brendan Radigan (Pagan Altar, Magic Circle) sings strikingly of lost souls in a world gone mad. Rizk and guitarist John Powers (Eternal Champion) keep their “Strats only” policy intact while wheeling in the full Marshall stacks to douse the record in glorious solos (witness the album closing duel of “Death to Mercy”).
Make no mistake, Dreamkiller is full of traditional metal fuel. After an amicable split with original vocalist Phil Swanson, Sumerlands have dug deeper into their secret well of cathartic riffage to soundtrack a planet “Running in circles as the bells, they chime.” Sing along, dream along, Dreamkiller kills ‘em all! 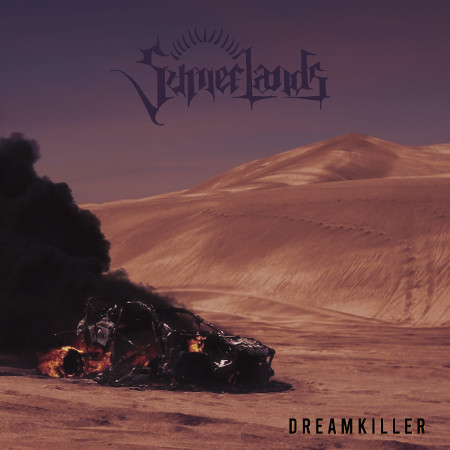