Formed in late 2012 by vocalist/guitarist Nico Cattoni, Raptore originally hailed from Buenos Aires, Argentina and released their first demo in 2014. In 2016, they released their debut album, Rage N’ Fever, which allowed them to tour South America and open for such bands as Exciter and Enforcer.
Not being able to find suitable musicians for a steady lineup, in 2018, Nico decides to move to Europe in order to give Raptore better opportunities and recognition. He set base in Barcelona and completed the lineup with three of the most talented musicians in the scene. One year later, they released the single “Prisoner Of The Night” through Church Recordings and were booked for festivals such as Pyrenean and Trveheim. Unfortunately, the pandemic delayed those concerts until 2022.
Nevertheless, the fortified Raptore lineup began work during 2021 on their second album, Blackfire, entering the esteemed Moontower Studios. Immediately, right from the very first notes, Blackfire EXPLODES with an excitement that simply cannot be contained. Righteously ripping, draped in darkness but lined with purple velvet, Raptore here give a masterclass in spooky speed metal: fierce yet fun, authentically rooted in the ‘80s but not blinkered by the past, and above all ADDICTING. That the quartet can maintain a bristling energy no matter the pace – cruising, headbanging, or overdrive – is some sort of black magick; that each track is anthemic in its own right and then altogether coalesce into a unified statement of intent is simply diabolical. But, while Blackfire is most definitely the band’s darkest and fastest recording to date, let it be known that not everything is of a Satanic/vampiric/demonic intent; just as many personal messages exist within the album’s eight-song/32-minute runtime. Which is all to say nothing of the evocative lead-work, which is literal FIRE!
Featuring an absolutely stellar mix & master courtesy of Javi Felez, Blackfire firmly establishes Raptore as worldwide contenders. From past to present – from Helstar, Liege Lord, and Chastain to Enforcer, Skull Fist, and White Wizzard – prepare to get BURNED! 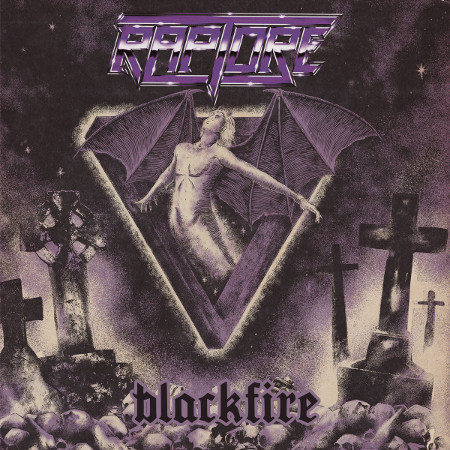