"Year of the Demon" compilation album!

Southern California metal masters Night Demon will release a special compilation album via Century Media Records. Comprised of the band's five standalone 7" singles from 2020, this 10-track collection features original songs, cover tunes, and previously unheard live recordings.
When the world came to a gut-wrenching halt in March 2020, Night Demon's extensive touring plans were derailed; however, their creative flame burned brighter than ever. In the spring and summer of 2020, the band unleashed a series of five standalone, limited 7" singles, which their loyal legions voraciously devoured; all physical product sold out instantly. Aside from the original songs (which were also released on digital/streaming platforms), the single recordings were exclusive to the 7" vinyl pressings; they have never been made available to the public for purchase in any other format - until now, with Year of the Demon.

For a decade, the name Night Demon has been synonymous with top-shelf traditional heavy metal. Indeed, the trio consisting of Jarvis Leatherby (vocals/bass), Armand John Anthony (guitar) and Dusty Squires (drums) have been long been lauded as purveyors of stellar songs, searing live shows, and a relentless work ethic. Now, they return with Year of the Demon, which collects all five of the rare, out-of-print 2020 singles for a unified compendium that will be available in a broad range of physical and digital formats. The reason for compiling this album is simple: these songs deserve a wider release than the collector's edition 7" vinyl treatment that they received in 2020. Year of the Demon captures a year in the life of Night Demon, a year in the life of us all, unlike anything any of us had ever experienced before.
For Night Demon fans that are ravenous for fresh material - 2022 truly is "the year of the demon"! In addition to the compilation due out in March, the band is excited to reveal that they are presently working on a new studio album, with a scheduled release date of November 4th, 2022. 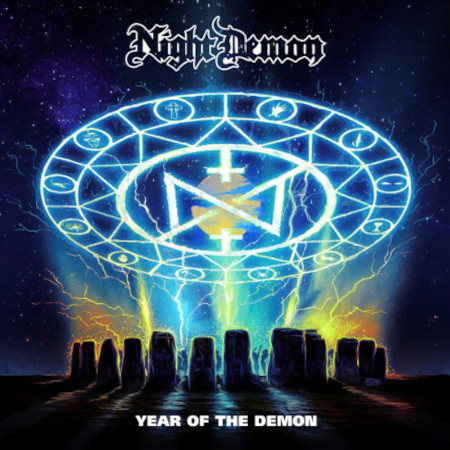