With nearly five years having passed since the band’s last release, rest assured – Shattering Reflection is absolutely worth the wait. EVIL INVADERS deliver a brand-new collection of dynamic, classically inspired but undeniably fresh tracks, focusing on strong choruses, gripping lyrics and even progressive touches that will grab every extreme heavy metal fan by the throat and have them screaming for more! Standing out amid their modern contemporaries, EVIL INVADERS aren’t here to look backward – they practically ooze extreme and thrash/speed metal precision from their very pores, delivering an authentic amalgamation of fresh songs that fast track the genre into the future.
EVIL INVADERS’s Shattering Reflection promises to be a game-changer for the Belgian four-piece, as the band finds their own formula – twisting heavy metal into yet another extreme direction. The album takes off with speeding banger “Hissing in Crescendo”, followed by the epic anthem “Die For Me”, already destined to become an EVIL INVADERS all-time classic. A calmer side is explored on tracks like mid-tempo opus “Forgotten Memories”, creating a dense, heavy wall of sound with equally piercing vocals and lyrics underlined by guitar solo virtuosity. That thrilling epos stands in line with “In Deepest Black”, further showcasing how the band has managed to craft a pure classic heavy metal anthem with melodic guitar lines and catchy choruses, creeping relentlessly into the listener’s head. It also proves that frontman Joe has undoubtedly matured vocally, as his voice enters a whole new dimension in all facets. On the contrary, “Sledgehammer Justice” is a furious outburst of classic thrash/speed metal in which the Belgian quartet goes full throttle with hammering rhythms and guitar solo madness! Another album highlight is dark opus “The Circle”, creating a horrifying atmosphere with stomping drums and excellent guitar lines. Fans of King Diamond will definitely dig this one! Throughout the album, the band manages to keep the balance between fast extreme heavy metal with sharp shredding and mosh-worthy tracks, as well as melodic, intense and chorus-oriented mid-tempo anthems.
Shattering Reflection is a monster of an album that indisputably proves that, within in a new generation of metal bands, EVIL INVADERS have developed and matured record after record, just like classic metal bands of yore. Fans will instantly clamor to hear Shattering Reflection in full, and see these sinister tracks performed live on stage!
Joe (vocalist & guitarist) on Shattering Reflection: "I’m very satisfied with what we achieved on Shattering Reflection. We’ve created a very versatile and surprising album. Because it had been so long since we’ve released anything new, we had a lot of demo material to choose from and I think that’s what made this record so interesting. We had the time to experiment with the songwriting, arrangements and vocal lines. Also the collaboration with Francesco Paoli as a producer was really cool. We managed to truly give the songs a unique vibe.
It feels like we’re at the start of a new chapter for the band and I’m excited to hear people’s reactions to the new stuff! It was a long and heavy process but it was totally worth it!" 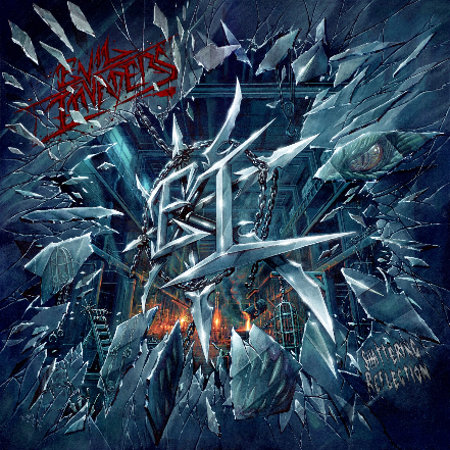