New album "Flowers Of Evil" and their first book "Wolves evolve: The Ulver Story" out on August 28th!

I – FLOWERS OF EVIL
In the midst of the forest, the floor is littered with monstrous heads and mythical figures, frozen in torturous combat or threatened by wild beasts. A dragon fights a dog and a wolf. A lion sinks its teeth into the fire-breathing monster’s chest.
This sacred grove, near Bomarzo in Lazio, Italy, reveals the nightmare vision of Vicino Orsini, a sixteenth century nobleman. It’s a forest of symbols, suggesting a civilisation overrun by the beasts, demons and monsters of the primordial world. Soon after Orsini’s death, trees began to close in on these many peculiar beings, and green moss would eventually seize them. Slowly, nature finished what he had started.
Flowers of Evil, the new studio album from Ulver, finds the wolf pack exploring the fear and wonder of mankind’s fall from redemption. Visions similar to those of Orsini come to mind, as untamed life abounds:

THEY SPREAD
TWIST AND TURN
IN THE KILLING FIELDS

The threads of haunted places and images entwine. Have Ulver discovered new pastures under the sun? Or scoured the ruins of their own moonlit past? The truth is, they’re closer to their previous purlieu than perhaps ever before.
“Doom dance”, someone dubbed their last studio album, the critically acclaimed, Impala Award-winning The Assassination of Julius Caesar (2017). Flowers of Evil comes across as an unfeigned progression along the course set by that album, revealing a band moving deeper into beats and grooves, hooks and choruses, synths and guitars, yet sounding more stripped back, making room for the distinctive detail. Once again Michael Rendall (The Orb) and legendary producer Martin “Youth” Glover have taken crystalline care of the mix.
As Caesar demonstrated, Ulver haven’t abandoned any of their obsessions, worries or nightmares as they enter the gilded palace of pop. “One last dance / in this burning church”, Kristoffer Rygg announces on the album’s opening track, featuring old friend Christian Fennesz on guitar and electronics. It sees them locked inside their Hall of Mirrors. A slow build brings the music to the album’s pulsing theme:

With Flowers of Evil Ulver have fled a burning Rome, only to confront further crime and corruption. ‘Russian Doll’, the album’s first single, moves determinedly through the night, with a story of unfolding tragedy and misery. ‘Machine Guns and Peacock Feathers’ brings fiery end-time imagery – “barrels are burning / great art will be destroyed” – with a disco beat and flashy ’80s synths. Dismal cries resound on ‘Hour of the Wolf’; echoing Bergman’s classic film, the song is dedicated to the hour between night and dawn, “when most people die, when sleep is deepest, when nightmares are most real”. ‘Apocalypse 1993’ reveals Ulver at their catchiest, its bounding-goat groove running hand in hand with a grand chorus depicting the catastrophic events at Waco, Texas, during the winter of that year – the very same winter that saw the birth of Ulver’s first incarnation. From that thorny undergrowth, this is what they have become: an eclectic, many-headed beast, chanting the ecstasies of the spirit and the senses.
Flowers of Evil unfolds with the shattering second single, ‘Little Boy’. A mysterious beat moves the track towards its thunderous climax, and here Michael J. York’s ominous pipes melt into the softer, moodier ‘Nostalgia’, a ’70s soul shuffle, and the heart-breaking Talk Talk-esque balladry of ‘A Thousand Cuts’. Finally, the wolves are back in the palace of excess, waltzing the night away. Yet around them, the wilderness rises, triumphant; “grass will grow over your cities”, as the Bible says. 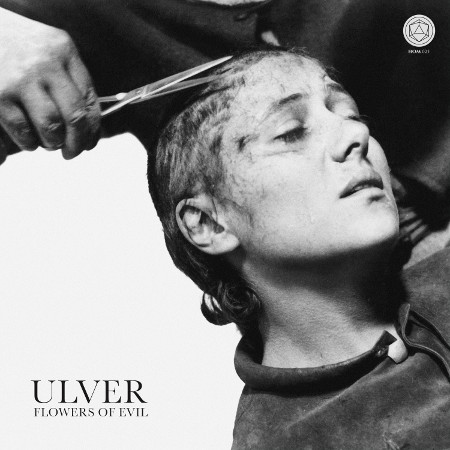 II – THE ULVER STORY
As this silent spring comes to an end, it’s time to reveal more of what the fabled Oslo band has buried from view. Along with Flowers of Evil comes Wolves Evolve: The Ulver Story, a 336-page book, reflecting on over 25 years of Ulver history. Always fond of lavish packages, this book of wolves is the latest addition to their sacred grove. From the band’s brief preface:
We’ve been talking about making a book – the Ulver story – for years. First for our 15th anniversary, then for our 20th anniversary, and now, after well over a quarter of a century, the time has come. We’ve been riding this beast for the greater part of our lives, and the future is not what it used to be.
The book includes 150 pages of conversation with the band, conducted and framed by the undersigned, alongside textual detours by Phil Alexander, Nile Bowie and Torolf Kroglund, and a wealth of photographs from the private archives of the band and others.
The conversations began among the spring blossoms of two years ago, with the recollection of their first downtown Oslo rehearsal space, back in 1993, in the midst of a new home-grown scene – small, fertile and hell-bent on pushing boundaries. Wolves Evolve follows Ulver through the dark woods of their infancy and into the dead city centres where they would shift between their many shapes to come: apostates and phantoms, thieves and mourners, chameleons and dogs. They discuss their reclusive studio existence, and the enlarged pack’s venture out into the open air as a live band. Fittingly, the conversations ended this January, in their studio, just a few hundred metres from where it all began, 27 years earlier.
“We go to the ruins to understand”, says Jørn H. Sværen, and Wolves Evolve is indeed a labyrinthine tale of musical evolution on a grand scale. Some may be confused. Others will follow the band through their pantheon of friends and associates, obsessions and affinities. And while there, they will get a glimpse of the shapes and mis-shapes that have made up the alternative cultures of the past three decades, rescued from the iniquity of oblivion.

More in this category: « OCEANS OF SLUMBER VARATHRON »