With their metal-influenced punk rock and huge drive, Browsing Collection have brought salvation to audiences from stages all over Sweden and at several of the country's biggest music festivals. In the recent years, they have toured frequently in Europe and also made two tours in South Korea. The band has been playing together for over ten years and has also written music for Swedish national television and for Star Stable, one of the world's largest online games. Their latest singles have landed several major Spotify listings such as Hard Rock and RIFFS.
Browsing Collection are now releasing their second album 'Cyber ​​Space Buffet' and compared to their previous album from 2015 there is now a more coherent sound and a prominent red thread in lyrics and themes. The band explains:
“First and foremost, we have definitely dared to develop our sound very much on this record. Although we have felt the same way before the previous release, it is really this time. We do not, however, claim that we have "found" our sound now, because we have already done so before, but rather that we have now pushed the boundaries and jeopardized our safe genre by being inspired by everything between blues, metal, punk, pop and hip hop. For example, the song Souls For Sale is based on a country-scented banner riff, two of the songs on the record have snortight gangsta rap, in Oh No meets the heaviest riff we wrote since we were 12 with the most friendly refrain that a hard rock band ever dared to record and At Broken Bone Blues, Carro actually never played drums, but we gave our producer Nicklas Eklund free hands to sample and program them. The whole album therefore sounds like a full-blown sound party where loud and low, hot and cold, explosive punks and stolen balloons meet to grab a bunch of beer and take over the world. And we're so incredibly pleased. "
Last year, Browsing Collection received the Music Prize of the Future (issued by RUM and STIM) in parallel with completing their upcoming new album. The band wants to write songs that matter, which can help open people's eyes, and often with a twist. Many songs are written based on humorous metaphors or different, innovative perspectives, although the issues discussed often are the same.
When asked about what was the biggest source of inspiration for the new record, the band responds: “We were inspired by ourselves, actually, by our previous EP release. It's so fun and powerful to release music when the sound keeps getting better and better. Then, of course, the same factors that always drive us to write songs - situations we often end up in, how society looks and how we can take a stand through our music. But also, for example, breaking the wrist, being sugar addict or daydreaming about how it would actually be to bake pizza with Jesus. "
Browsing Collection never have a quiet moment so they obviously have more projects going on. In recent summers, they have been on site in Sölvesborg to hold a music camp in conjunction with the country's biggest rock festival Sweden Rock Festival to inspire more girls and transgender people to take their place in the male-dominated rock scene. This is part of an extensive work on gender equality that is very close to the heart.
'Cyber Space Buffet' is released March 27 by Browsing Collection via Ditto Music
PR and music publishing by Icons Creating Evil Art. 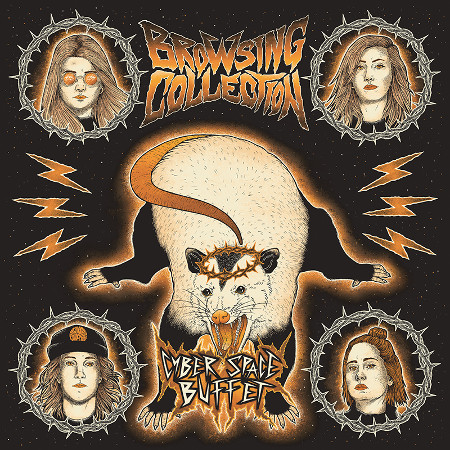