White Lion originally formed in 1983 when Danish singer Mike Tramp moved to New York City and teamed up with guitarist Vito Bratta, later joined by James Lomenzo on bass and Greg D’Angelo on drums. Mike Tramp and Vito Bratta would make a strong and consistent writing team throughout White Lion’s brief career.
Releasing their debut “Fight To Survive” (CD1) independently in 1985, the band’s fortunes really took off once they were snapped up by Atlantic Records to release second record “Pride” (CD2) in June 1987. As lead single ‘Wait’ began to pick up plenty of airplay, as well as heavy rotation on MTV, hitting No. 8 on the US Billboard Hot 100, the platinum album peaked at No. 11 in the US. There was further US chart success with the singles ‘Tell Me’ (No. 58) and ‘When The Children Cry’ (No. 8). The bonus tracks included here are ‘Wait’ (Extended Remix), ‘When The Children Cry’ (Edit), ‘All You Need Is Rock ‘N’ Roll’ (LP Version With Intro Edit), ‘All You Need Is Rock ‘N’ Roll’ (Short Version) & ‘Tell Me’ (Edit).
Touring heavily, opening for Aerosmith, Ozzy Osbourne, KISS and AC/DC well into 1988, White Lion released the third record, “Big Game” (CD3) in August 1989. As per “Pride”, “Big Game” was produced by Michael Wagener, reaching No. 19 in the US charts. As well as the singles ‘Little Fighter’ and ‘Cry for Freedom’, the album featured a cover of Golden Earring’s hard rock staple, ‘Radar Love’. ‘Cry For Freedom’ (Edit) is included as a bonus track.
This time produced by Richie Zito (Poison, Mr. Big, Elton John, Cher, The Cult & Bad English), fourth and final LP by the original, “classic” line-up of White Lion released “Mane Attraction” (CD4) in 1991. Although “Mane Attraction” can sit proudly alongside their two previous albums for Atlantic, like many of their contemporaries who found fame, fortune and platinum sales in the 1980s, White Lion were beginning to look and sound a little out of step at the beginning of the new decade, as grunge would wipe away many bands of a more glam-based nature. They would soldier on into 1992, before calling it a day. “Mane Attraction” also now features ‘Lights & Thunder’ (Edit).
Versions of White Lion would periodically be formed by frontman Mike Tramp, but sadly not capturing the peak of their Atlantic years. The fifth disc captures the band doing what they did best, performing their melodic hard rock Live (CD5) on stage, with a set that includes live versions of ‘Wait’, ‘The Road To Valhalla’ & ‘Sweet Little Loving’. Live rehearsal versions of ‘Little Fighter’ & ‘Don’t Give Up’ complete CD5. 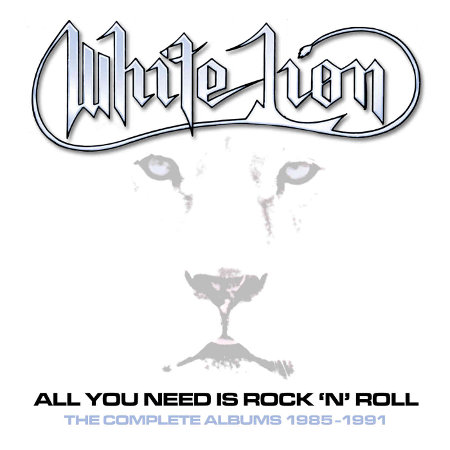