"London Apocalyption - Live At The Roundhouse"!

The cold fingers of winter have already reached out for the British capital but there is one place in London that is set on fire as KREATOR thrill their fans with an extensive live show and take their breath-taking performance once again to another level. Today, the band announces the release of the proof of this memorable night: The live album "London Apocalyption - Live At The Roundhouse" will be released on February 14th 2020 via Nuclear Blast.
Singer Mille Petrozza states about the live album: "Hordes! Welcome to London Apocalypticon! This is the culmination of a long and epic touring cycle in support of GODS OF VIOLENCE – over 150 shows, 5 continents and many amazing memories made! We’re very proud to share this amazing piece of KREATOR history with you; 3 professionally shot shows, plus professionally mixed and mastered audio; all of which has been meticulously laboured over to produce the best ever KREATOR live release! But if this is still not enough for you…you can witness the real thing this spring when we embark on the ‘State of Unrest’ tour with the mighty LAMB OF GOD and POWER TRIP! Respect!" 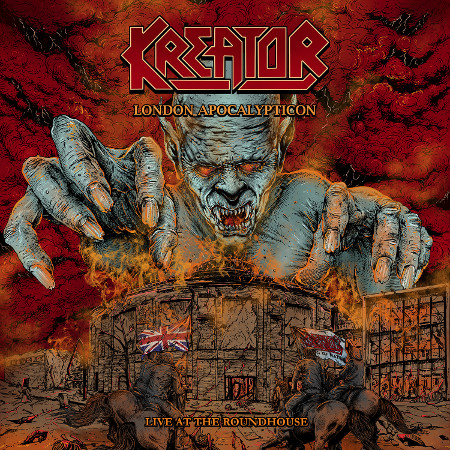