The indomitable will to succeed, true to the motto "It's a long way to the top if you want RnR" has been the driving force behind MYSTIC PROPHECY for the past two decades. As a result of this, the band founded by R.D. Liapakis in 2001 has purposefully and stubbornly developed into a huge heavy metal machine that stands for unrivaled reef power and old-school spirit like no other band on European soil, combined with modern Zeitgeist. Already with the first three albums `Vengeance` (2002),` Regressus` (2003) and `Never Ending` (2004) the band showed their high musical competence. At that time, even a Ozzy Osbourne fell on the class of the then Mystic Prophecy exceptional guitarist GUS G. (Arch Enemy, Dream Evil, Firewind) so much that he abraded this for his band.
But setbacks like this ultimately only strengthen the southern German Power Commando on its unwavering path into the heavy metal Olymp, and so the metal machine in a changed cast to new peak performances. With the entry of guitarist Markus Pohl, a second constant enters the Band and the power level rises again to a higher level. Successful tours with for example Freedom Call establish the band even more in the scene and with other albums `Savage Souls` (2006),` Satanic Curses` (2007), `Fireangel` (2009) and` Ravenlord` (2011) they play in the first League of the European Power Metal scene. Other tours with Death Angel, Stratovarius, Powerwolf, Majesty, Grave Digger, etc., and big festival appearances at Prog Power, SummerBreeze, Metalfest or NOAF show that MYSTIC PROPHECY is a sustainable guarantor of unadulterated Heavy Metal. Uncompromising "true, and right between the eyes" is the motto. Even if there are always line-up changes to be made, the core of the band is always working hard and goal-oriented. Shows with Loudness, Sabaton, Primal Fear etc. as well as other festival shows in Wacken, Earthshaker Fest., Metal Camp etc. are gaining further popularity.
With the 2013 album `Killhammer` and the subsequent tour with Masterplan, the Band finally manages to create a true genre classic. Three years later, with "War Brigade", they deliver another fragmentation bomb, and for the first time in the band's history, it becomes apparent that a line-up has come together here that harmonizes perfectly. In 2018 they surprised with a cover album called 'Monuments Uncovered', whose idea is not new but shows a courageous band that covers unusual songs and is highly praised by the press and fans.
Further tours and festival performances, e.g. Bang Your Head Festival, Delta Metal Meeting, etc. are being played and the work on the eleventh album is being tackled at the same time. Looking back, you can say that MYSTIC PROPHECY have done everything right so far. Chart placements, appearances at the biggest metal festivals, numerous tours. But the way is the goal and so is a new album.
`Metal Division` is the name of the new album, which the Power Metal Tank has recorded for his new label ROAR! Rock of Angels Records. `Metal Division` sounds versatile yet familiar. But you realize immediately, the band has developed musically and at the same time delivered one of the most catchy albums of their career, without the hardness has suffered. The album sounds more mature, more compact and heavier than its predecessors. The narrow line between old school and metallic Zeitgeist is taken confidently. Song titles like `Die With The Hammer`,`Eye To Eye` or `Victory In Mine` drill into the ear canal like spearheads. The title track `Metal Division` even compares to Dio, which is due to the haunting chorus and the pounding dynamics of the song. MYSTIC PROPHECY will convince the quality-conscious Heavy Metal fan supersonic. This will also be contributed by their new label, which is fully committed to the support of the band. So let's raise hell! 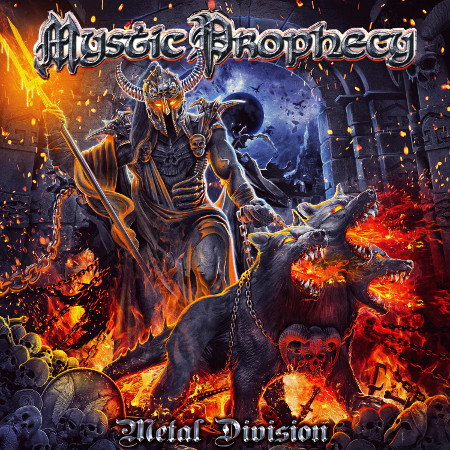