A genuine rock star since birth, Michael Monroe innately knows exactly how to sing, swagger and walk the most glamorous and colourful of walks. One Man Gang, the former Hanoi Rocks man’s brand new offering on Silver Lining Music, is all about the fun of Friday nights, seven days a week, letting your hair down (or up!) for a dirty, dangerous, damn good time, and embracing a total escape into the rock ‘n’ roll dream.
Recorded and mixed by Petri Majuri at E-Studio in Sipoo, Finland over three weeks in March 2018, the 12-song record was mixed that following Autumn with Monroe and band-mates Rich Jones and Steve Conte on production duties.
With stunning presence, Monroe’s vocals blaze their unique trail across catchy, low-slung guitars mixing with saxophones, harmonicas and trumpets, plus a smorgasbord of exciting hooks and melodies. One Man Gang is old-skool strut with rudely fresh vigour.
The title-track’s bombastic bar-room blitz (featuring a guest appearance by Captain Sensible of The Damned) is a valuable reminder that even if born in the gutter, you must always look to the stars
Monroe says: “It sometimes seems like everybody’s pissing on their own parade, whether that’s voting stupid people into power and then complaining about them or whatever, but I’m all about living with a P.M.A. – positive mental attitude – and I’ll never allow myself to be forced away from that.”
Then there’s “Last Train To Tokyo”, with the sort of sticky-yet-crispy riff that was designed to take over radios from Japan to Jamaica.
Monroe explains: “In the ‘80s, Hanoi Rocks had a very special relationship with Japan and it will always be one of my favourite countries. Plus, they still live for rock ‘n’ roll as it should be celebrated, they still have physical product, they still make it crazy, exhausting and really exciting every time you go there, which I am really grateful for.”
With the further electric likes of “Junk Planet”, “Hollywood Paranoia” and “Wasted Years” on board, One Man Gang is going to smash down doors and give the rock ‘n’ roll scene a swift, and necessary, kick up the ass.
Michael Monroe will soon be striding back towards the arenas he was born to be in, and everything you see is everything you get.
Monroe affirms: “I do what I do and I’ll never change. I don’t dress any different on or off stage because this is who I am… this is the real me.” 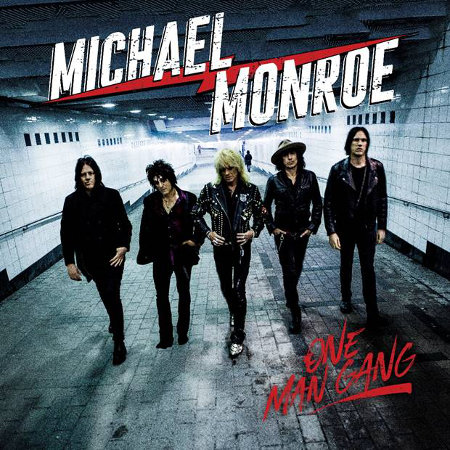